Headlines: ACC Hoops to Expand to 18?

Share All sharing options for: Headlines: ACC Hoops to Expand to 18?

Brian: We are rapidly approaching the offseason for all Boston College athletics, a fact that saddens me greatly, so for our headlines today we discuss some ACC basketball news.

Jeff, John Swofford is lobbying for the ACC basketball slate to expand from 16 games to 18 games. With the expansion comes more television ratings and revenue and will add some more regular season rivalry matchups like Maryland v. UNC x2. The downside being less out of conference games, possibly a lower conference RPI (ACC was #1 last year), and fewer teams in the tournament.

Jeff: Don't jump to too many conclusions here with this. Conference RPI could be lowered if athletic directors schedule weaker out of conference games as a result of this move. Personally, I don't see an ACC team suddenly turning down a invite to Maui just because they now have two more conference games. Also, what conferences are going to jump ahead of the ACC in RPI? The Pac-10, Big East, and Big Ten have already made the switch so I am sure the ACC, SEC and Big XII are not too far behind. I would love to see BC play two more ACC games each year because we know their out-of-conference schedule is nothing to get too excited about anyway. 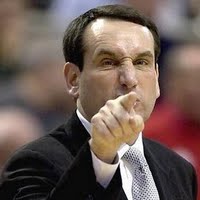 Brian: The reason this works for the Pac-10 is that they have 10 teams, so a schedule of 9 games with home-and-home series is perfect. The mega-mega-conference known as Big East basketball has 16 teams so 18 games helps get in a few more rivalry games every year. I'm torn on this one though. Maybe 2 more games would have helped Virginia Tech get into the NCAAs this year, since they had 0 wins against the Top 50. And the added revenues are always good. But 2 less out of conference games might prevent BC from scheduling some of our local rivalries like UMass or Providence, or maybe even see the Big Ten / ACC challenge go away, which would be bad. Not to mention the coaches, led by the godfather of ACC coaches Mike Krzyzewski, hate the idea. Ultimately, though, for better or worse, I'd imagine the ACC, Big XII and the SEC will all make the move to 18 conference games.


Jeff: As of today, the BC baseball team is last in its division and the softball team is second to last in the conference as conference play wraps up. This bother you?

Brian: Not really. With the move to the ACC, I didn't expect our ball teams to be extremely competitive with national powers Miami, Florida State, Clemson and North Carolina. Plus I won't pretend to have superior analysis or insights about college baseball or softball since I know next to nothing about those sports.


Jeff: On Friday, the Eagle in Atlanta gave us some DAP and said that we are "funny." Did this surprise you as much as it did me? I mean, we do intend to bring some humor to our BC sports analysis but I thought our execution was only as good as Skinner's full court press break.

Brian: I think ATL thinks it's funny that you have a man crush on UConn. And I think that's pretty funny too. We should put it to a vote to determine once and for all who adds more humor to this site.