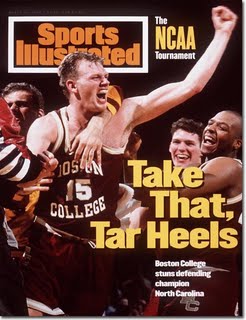 ... But it was another senior, 6'9" center Bill Curley, who scored 10 of BC's final 11 points, spinning to the basket past Eric Montross and Rasheed Wallace. The game ended on a telling note: There was Wallace, a freshman who hadn't shot a three-pointer all year, trying to make a trey to tie the game against the Eagles, whose senior sharpshooters had wrung from that shot everything they could. Wallace's effort clanged off the rim.


On the Heights, Curley scored over 2000 points in his career, including 681 points in his senior season of 1993-1994 (5th best scoring season in BC history). His point total ranks 4th in school history, behind Troy Bell, Craig Smith and Dana Barros. #15 also was the Eagles leading scorer and rebounder for each of his 4 seasons at Boston College. Other all-time Eagles records held include field goals made (5th), field goal percentage (4th), free throws made/attempted (3rd), rebounding (4th), and games played/started (4th).

Curley would go on to be drafted in the first round of the 1994 NBA entry draft, #22 overall to San Antonio. His pro career limited by injuries, Bill made pro stops in 5 cities over 5 years - Detroit, Minnesota, Houston, Golden State and Dallas.

Also, a Happy belated Birthday to Elizabeth Hasselbeck. Hasselbeck also got a proper PTI shoutout yesterday from TK. Although I've never watched The View, we did watch Survivor: The Australian Outback while in school. She got robbed, finishing fourth in the 2001 edition of the popular reality tv show. 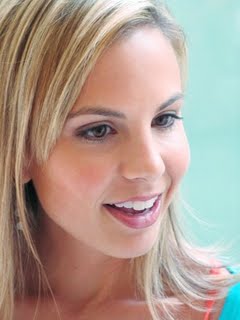