Thursday = Happy Time, Eagles!
Thursday also = May Day, a.k.a. International Workers' Day. For those of you residing in the more socialist reaches of the planet, enjoy the day off work. And be happy that you aren't stuck in a cubicle like me ... 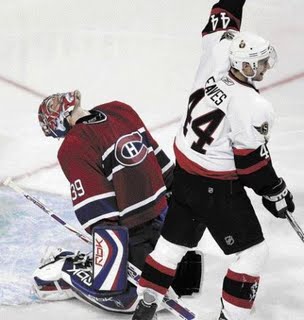 Happy Birthday Patrick Eaves. The right winger currently plays for the Carolina Hurricanes, after being traded earlier this year from the Ottawa Senators for Cory Stillman and Mike Commodore. Pat was a member of the Eagles from 2002-2005, tallying 47 goals and 60 assists over his three year career. After his freshman year he was drafted by the Sens with the 29th overall pick (1st round). Patrick's brother Ben played for the Eagles from 2000-2004 and currently plays professionally in Finland. Patrick and Ben's father, Mike Eaves, coaches the University of Wisconsin's hockey team - a team Eagles fans are all too familiar with.

(Leave your humorous caption to the picture above in the comments section below.)

Five draftees is a significant number of picks from BC, but doesn't come close to the 9 Eagles that were drafted in the 1974 draft that included Kansas City G Tom Condon (10th round, 250th overall). You may know Condon now as the superstar sports agent who represents fellow BC Guys Matt Ryan and Mathias Kiwanuka in the NFL.


Happy Trails to the BCS Plus One System. The 12 Angry Men really like to push my buttons. The 11 conference commissioners and Notre Dame's AD voted decidedly against any Plus One or Final Four system for the top 4 highest rated BCS teams at season's end. So we're stuck with the same broken system we currently endure until 2014. Not to mention we get this gem of a sound byte from ACC commissioner and BCS chairperson John Swofford:

"The BCS is in an unprecedented state of health."


Yep, this is the guy who runs our conference. Just saying. Big BC Interruption DAP to SEC Commissioner Mike Silve for sticking his neck out there and lobbying for a much needed fix to the system.


Also, a melancholy Happy Trails to Ivan Caesar. Caesar was shot and killed in his Orlando home on Sunday at age 41. Caesar was a linebacker at Boston College from 1987-1990, and later went on to play one season with the Minnesota Vikings. The Eagle LB also made Arena league stops in Tampa Bay, Portland and Milwaukee. We send our best to Caesar and his family.