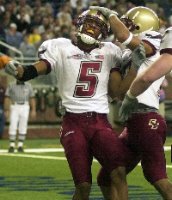 Happy Birthday Grant Adams. Grant played wide out for BC football from 2000-2004 (a good four years on the Heights!). Over the 2003 and 2004 seasons, he was the Eagles leading receiver, including 52 catches for 745 yards and 3 scores in his senior season. Grant saw playing time in four bowl games (all wins), including the Continental Tire Bowl against North Carolina in his last collegiate game (5 catches, 53 yards, TD). Career line: 132 receptions, 1,983 yards and 13 touchdowns. Adams would sign a free agent contract with the Philadelphia Eagles in 2005 however would be released from camp that August.

Happy Trails Nate Gerbe. Although we’re sad to see Nate go, what more could we have asked from the dynamic Boston College forward? National championship, Frozen Four MOP, Hockey East tournament championship, Beanpot championship, Hobey Baker runner-up. Thanks for everything you did for Boston College and the hockey program, and best of luck on the Sabres.

Check out some of the highlights from this past season, many of which feature Gerbe. (Thanks to vinsanitybc for the link.)