The Fate of Skinner and the Big Finish

Share All sharing options for: The Fate of Skinner and the Big Finish 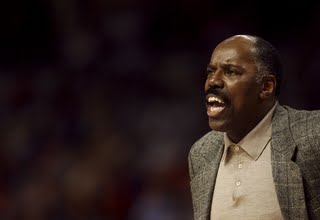 Brian: OK, Jeff, as part of his basketball season ending grade series, the Eagle in Atlanta gave Al Skinner a C-. That cool with you? Does cool Al get a pass, or are you firmly in the Fire Al Skinner camp?

Jeff: Hell no, I don't think Skinner should be fired! Those people are crazy. ATL's grade on Skinner's job this season was fair. He had more talent than other teams in the ACC yet they finished tied for last. Worse yet was the way they lost with so many turnovers. If your team sucks at least teach them to hang onto the ball and play hard. BC did not do that this year but Skinner is still great and can coach at BC until he decides to retire.

Brian: Wow. I am all about giving Skinner a pass this year and part of next year with all the new talent coming in, but giving him a lifetime free ride might be a little too extreme. If things aren't appreciably better in a year or two, it might be time to reevaluate.

Jeff: The Heights did a piece on end of season awards and gave John Oates The PSE&G Pure Electricity Award. Your thoughts?

Brian: The only thing John Oates lit up this year was the far right side of the Conte scoreboard - personal fouls. C'mon. You write a piece doling out postseason hardware and you have Matt Ryan, Tyrese Rice, Jamie Silva, Nate Gerbe ... and John Oates as the recipients?!


Brian: Boston College is rumored to have landed its first four-star recruit for 2009 in Dillon Quinn, a 6'6" 271lb. defensive end. Jeff, you impressed?

Jeff: Happy? Sure. Impressed? No. Jags is supposed to be bringing in some of these recruits partially because of the years of success TOB had before him.


Jeff: Brian, Swofford was one of the commissioners who proposed the Plus One system but it got voted down in the end. The Pac-10 and Big 10 got their way. Without bashing Swofford, who I know you loath, how pissed are you?

Brian: OK, so I owe Swofford a little bit of DAP for being a proponent of the system. But you know this outcome infuriates me. And how does Notre Dame get a seat at the table of 12?! Their program is becoming a shell of what it once was. College football remains the best collegiate sport with the absolute worst playoff system ... until at least 2014.


Brian: Last one, I saw Chris Rock last night at MSG and three nights ago caught a taping of The Daily Show with Jon Stewart. Toss up - who's hosting your Academy Awards? Chris Rock or Jon Stewart?

Jeff: I gotta go Chris Rock but you can't go wrong with Jon Stewart either.