Sizing Up the Wolverines

Share All sharing options for: Sizing Up the Wolverines

Next up on our tour of Frozen Four teams, the #1 seed from the East regional and early favorite to win their 10th title, the Michigan Wolverines. 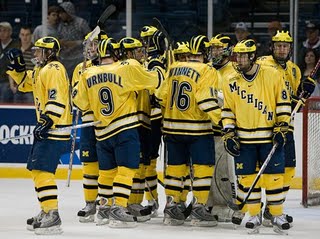 Road to Frozen Four: Defeated Niagara 5-1, defeated Clarkson 2-0, won the CCHA regular season and tournament championship, defeating Miami (OH) 2-1. #1 seed in tournament.
Fact: This is the 18th year in a row that the Wolverines have made the NCAA tournament field

This Year vs. the Eagles

BC lost to Michigan 4-3 in the first game of the season in the opening round of the Ice Breaker tournament in Minneapolis. BC battled back down two goals to tie it up at 3, only to lose in overtime off a puck that deflected off of Ben Ferriero's skate.

History vs. the Eagles

BC and Michigan have been no strangers to one another in the National tournament, having played some memorable games in the tournament and the championship game. In the 1998 title game, the Wolverines defeated the Eagles, led by Marty Reasoner and freshman Brian Gionta, 3-2 in OT for their 9th (and last) NCAA title. As part of the 2001 title run, BC had to go through Maine, Michigan and North Dakota, the three teams that had bounced them from the Frozen Four in 1998, 1999, and 2000.

In 2004, with a trip to the Frozen Four in Boston on the line, the Eagles beat the Wolverines 3-2 in overtime to win the Northeast Regional. Michigan holds a 9-6 advantage in the all-time series.

How They Advance To The Title Game

- Kevin Porter continues his red hot performance from the East regional (5 goals, 1 assist)
- Speed up the game as Notre Dame doesn't like to play the quick transition game
- Get solid play from goaltender Billy Sauer
- Hope the luck of the Irish runs out on ND