Sizing Up The Irish

Share All sharing options for: Sizing Up The Irish

The Frozen Four gets underway in ~1 week. Between now and faceoff, we'll take a look at the teams that are still alive in the National Tournament. We start with the surprising Notre Dame Fighting Irish, the #4 seed from the West Regional.

Will the Holy War rivalry spill over onto the ice this year? According to our sidebar poll, no one seems to think so ... the Irish have no small task in knocking off the East's #1 Michigan. Eagles fans are more than familiar with the Irish on the gridiron, but here's a look at their hockey team and their surprising run to the Frozen Four. 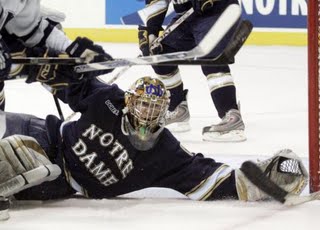 History (vs. the Eagles)

For a university that calls BC "Fredo" due to our severed ties to the Big East conference in all other sports, the Irish sure have moved around quite a bit with their conference affiliation in hockey. They started as an D-I independent in 1968, were members of the WCHA from 1971-1981, jumped to the CCHA from 1981-1983, decided to test the waters as an independent from 1983-1992, [realized that there wasn't a lucrative NBC television contract to be scored in college hockey,] then rejoined the CCHA in 1992.

BC typically schedules Notre Dame every year in a non-conference battle in September-October. The teams compete for the Snooks Kelley-Lefty Smith Award, an award named after the two program's notable coaches. The last time BC faced ND was in 2006, a game in which we got blasted in Conte, losing 7-1. BC holds a 14-10-2 record in the all-time series.

How They Can Advance to the Title Game

Solid defense and goaltending. Stay out of the penalty box. Keep the pace of the game manageable to counter Michigan's high-powered offense. Get Mark Van Guilder in the box score.