Sizing Up the Fighting Sioux

Share All sharing options for: Sizing Up the Fighting Sioux

Last, but certainly the most important, on our tour of Frozen Four teams is BC’s opponent for Thursday’s national semifinal, the North Dakota Fighting Sioux. 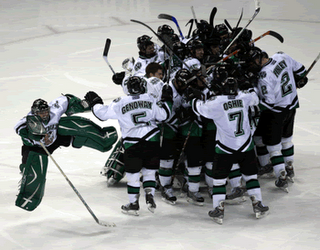 This Year vs. the Eagles

This game is a bit of unfinished business for both teams. The teams skated to a 0-0 tie after two periods at Conte Forum in October. The game was shortened due to fog coming off the Kelley Rink ice in a humid Conte Forum.

History vs. the Eagles

Unbelievably, Thursday’s game marks the 7th time out of the last 10 years that the Eagles and Sioux have faced one another in the National tournament. The teams traded national titles in 2000 and 2001. BC has won the last two meetings, both in the national semifinal. This is North Dakota’s fourth consecutive Frozen Four appearance (longest current active streak). The last team to make four consecutive trips to the Frozen Four? BC from 1998-2001.