Is Hockey Dead? and the Big Finish

Share All sharing options for: Is Hockey Dead? and the Big Finish 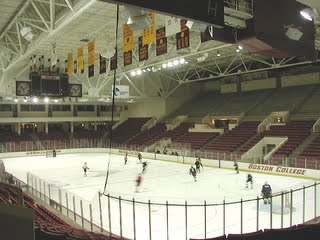 
Brian: Jeff, The Heights ran an article proclaiming that 2008 is not 2001 and that college hockey is dead in the collective consciousness of Eagles fans. Your thoughts?

Jeff: I wouldn't say hockey is dead, but I would blame Matt Ryan [on the supposed decreasing lack of BC hockey fan support]. Football was the thing on the Heights this year and 90% of BC students don't care about sports enough to get excited about football, basketball, and hockey. I am disappointed but if you think about it college hockey is not at all mainstream and BC students have other opportunities to storm the mods now during football season. Back in 2001 the national championship was it. Basketball won the Big East Championship over spring break and football was not spectacular.

Brian: (Don't drag Matt Ryan into this - he has nothing but the utmost respect for our hockey program!) I think you can look to two factors here. One is that there is just so much other stuff going on with students these days to get behind all of the big 3 BC sports. I also think this speaks to a larger trend of declining attendance across all of college athletics (perceived by me, not backed up with statistics ... yet). I agree with you though that its hard to support three sports with a small student body base. Add to this the fact that most alumni move away from Boston after their years at BC, so its harder for alumni to get to games unless you are in the area and/or a die-hard fan.

The second, as you rightly point out, is that football is again king at Boston College. In the late 1990s, football was decent and basketball had some mediocre-to-bad years leading up to 2000-2001. Plus the demographics of the student body are shifting from a predominantly New England student body base to a national university. I'm not sure how much this matters, but to some extent, students coming from parts of the country where hockey is a non-factor sport might be another contributor to hockey apathy. But I would say from experience (being freshmen at BC when we won a hockey title) that we probably will see an uptick in attendance and support over the next few years. Especially if basketball continues to struggle in the ACC ...

Jeff: Students are still supporting Boston College athletics as much as they used to. I remember when I was a student and Miami was #1 in the country and there were hardly any students there until the end of the first quarter and then many only showed up because the game was surprisingly close. Now the student section is much closer to full at kickoff of every game. Support has just shifted between sports.

Brian: We go to Friday's big finish on a weekend that marks the first real life BC Interruption meeting since the Champs Sports Bowl ...

Brian: UMass closes out a great year head-to-head against BC, beating us in the NCAAs in soccer (a #16 seed beats a #1!), basketball, a few hockey games and now baseball.


Brian: BC drew Iowa in next year's ACC/Big 10 challenge, a game to be played at Conte Forum. That's a W right?

Jeff: The Big Ten will lose the challenge again and BC will get a W.


Jeff: Last one, The Carolina Panthers are rumored to be flirting with the idea of drafting Matt Ryan. Good idea?

Brian: Who knows how healthy Delhomme is, so sure, its a good idea. They'd have to trade up though as I don't see Matt Ryan falling past #8.