Headlines: We Are ... National Champs!!

Share All sharing options for: Headlines: We Are ... National Champs!! 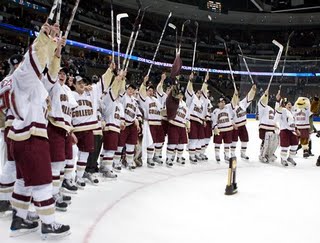 Brian: Jeff, third time is a charm for Boston College, as they dispatched of the upstart Notre Dame Fighting Irish 4-1 to capture our third ever hockey national championship. You were able to watch the game in South Carolina. What did you think of the Eagles performance?

Jeff: The Eagles controlled the game. I don't remember a point when I thought the outcome was in doubt. Even if Notre Dame's disallowed goal had stood, BC still had a goal advantage at that point and I would've been comfortable with that. The game had a very different feel than the game again North Dakota where when the Eagles were up 3-0, I still did not feel the game was over.

But how did the Eagles control the game and skate to victory? NATHAN GERBE. 2 goals and 2 assists. Take him out of the lineup and where would our offense come from? He was awesome. He was the quickest guy on the ice who also seemed to have the best sense and feel for the game.

Brian: Aside from Gerbe, the other hero of the tournament for me was the play of freshman netminder John Muse. Muse stopped 20 of 21 shots for the Eagles, and became the first freshman goalie to lead a team to the National Championship since 2005 (Denver's Peter Mannino). Muse picked up where Corey Schneider left off, finally getting the Eagles over the hump. Gotta love his focus too. Asked about whether or not he had anything left to prove in college hockey, given the recent propensity of collegiate goalies to jump to the pros early, Muse stayed on point.

"I've got three more national championships to go from here," he said with a smile.


Jeff: Yes, Gerbe stole the spotlight but Muse was great as well. I still think if he did not make a few good saves in the first period of the semis then that game would have gone completely differently.

Brian: Muse also kept us in the game for stretches of the National Championship game, particularly late in the second period when Notre Dame's physical play was getting the better of us. Not to mention keeping us in the Regional Final against Miami (Ohio).

The Eagles used an exciting brand of fast paced hockey throughout the postseason to capture the title. As reader Andrew said, what a turnaround! I couldn't be more proud of this team or our school. Some might say that we were far less talented than our 2001 squad, but this team was clicking on all cylinders at the perfect time of year. Also glad to see Carl Sneep come back onto the ice to hoist the National Championship plaque, after leaving the game early in the first period when a puck hit him in the ankle right above the padding.