Headlines: A Spring Look at the Offense

Share All sharing options for: Headlines: A Spring Look at the Offense

Brian: Jeff's getting a little tired of all this hockey coverage, since no one cares about college hockey down in South Carolina (well, almost no one) ... so we get back into the swing of things with some football headlines. Hooray. But first, a bracket update. Even though I got trounced by Jeff in our brackets this year (seriously, it wasn't even close), I take pride in picking Kansas as the winner of the second of Saturday's Final Four matchups. Bonus: I got some cash down on the game as my girlfriend was in Vegas, even though Jeff was texting me telling me to kiss that money goodbye and to give it time. At what point did you give up on Roy and the boys? 40-12?

Jeff: UNC came back and cut Kansas' lead to 4 which was fairly impressive in itself. As for the rest of the brackets lets just reiterate one more time that I gave you a beating overall. And nice link to Ashley Judd, any idea how many they packed into Rupp for that hockey game against Louisville at 10pm? Maybe BC needs to start having games that start at 10pm. Would more students attend? I doubt less would!

Brian: I got a National title game team pick right and you didn't (Nice pick with Clemson, by the way). But enough gloating, back to football. BC released its spring depth chart (thanks to ATL Eagle for linking to the prospectus). We take a look at the offense and the special teams today, as this fall marks year 1 A.R. (after Ryan) for Jag's offense. Jeff, your initial thoughts? 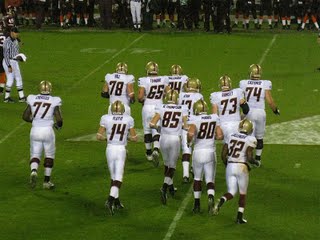 Jeff: Well, where are eveyone's eyes going immeidately? The QB position and it is as boring and predicatable as possible. Crane, the only option with any D-IA game experience is the starter, Dominique Davis who captained the second team in practice last year was the obvious choice for the number 2 slot, then in the number 3 slot sits Codi Boek. From these top three will come our starter for next season. Had Boek been slotted ahead of Davis or had Davis been slotted ahead of Crane this would have been newsworthy but instead there is no news here. Crane has no better chance of being the starter now than he did before and this depth chart is simply the safe or polictically correct chart.

Brian: Sorry that Jags disappointed you Jeff in not stirring the pot and placing Boek as the #1. I guess he's not the second coming of Paul Peterson like you were hoping for. I'm particularly excited about the other offensive specialists. A receiving corp of B Robinson, Megwa, Gunnell and Jarvis, add to this Larmond and all-Conference TE Ryan Purvis and we are starting to develop some nice young weapons for Crane to throw to. Also, I'm pretty excited to see how Josh Haden performs in Logan's offense.

Jeff: Josh Haden has to excite you. BC went about a decade with good to great college running backs but when Derrick Knight left LV and Andre just never quite got to that status. I have high expectations for Haden. Did you look at the special teams though? Aponavicius is still the #1 pk which is not a good sign considering we were passing up 35 yd field goals at the end of last season. Also, we dont even have a single punter listed.

Brian: Don't forget that BC has signed Ryan Quigley as a kicker from your neck of the woods, Jeff. Little River, SC. He's not on the spring chart because he's not yet on campus. The question will be whether he will serve double duty as both the place kicker and the punter. Still, special teams killed us last year and I would imagine they are even more important this year with our defense keeping us in close games. Winning the field position battle could turn 1-2 losses into 1-2 wins next season, and its a little disconcerting to trust both kicking and punting to a true frosh. Still, I hope Quigley steps in and makes an impact right away.

Jeff: I have no problem with a true frosh kicking. It would be nice to have the same guy there the next four years, but what if he gets hurt? That's a lot of eggs in one basket if you think our kicking game could turn 2 Ls into Ws.

Brian: Well I know for a fact that poor special teams play was a huge factor in our ACC championship loss to Virginia Tech. It would be nice to have some confidence in our kicking game from beyond 40 yards.