Headlines: One Stays, Another Goes?

Share All sharing options for: Headlines: One Stays, Another Goes? 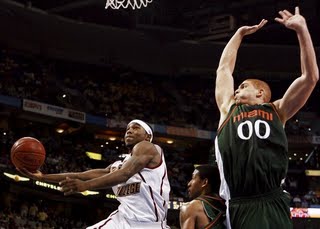 Brian: Happy Marathon Monday, Eagles! We start with the story that junior guard Tyrese Rice is staying for his senior season on the Heights. Good move for Rice and the Eagles, right?

Jeff: I am thrilled Rice is coming back but never really thought he was strongly considering leaving. But now that it is official, Al Skinner should be excited about next year's team. This past season was disappointing but now all key players will be returning so this year shows much more promise for basketball.

Brian: I'm also excited for next year's squad and Skinner & co. should be as well. We lose Oates and Blaire to graduation and Kaba and Spears to transfers, but gain incoming Colorado freshmen Reggie Jackson and Dallas Elmore, freshman Florida PF Evan Ravenel and Vermont transfer Joe Trapani. Add another year under Rakim Sanders belt (who I'm told I'm abnormally high on) and it should be a much better year for the young Eagles squad. 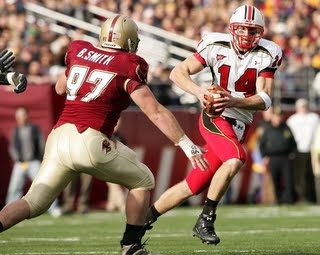 Jeff: The other storyline is that star defensive end Brady Smith was suspended indefinitely from the Eagles football team.

Brian: This is a really unfortunate storyline. If its true, I would say its the end of Brady Smith's time in maroon and gold. If its not true, he might be suspended for a game or two before rejoining the team. Just an unfortunate storyline all around and a blow to the BC's defensive line.

Jeff: I think it is premature to speculate that Smith is done with the Eagles. Let's let all the details come out and then kick him off the team. Sexual assault is not good but it was an on-campus incident and on-campus problems seem to be more controlled and do not escalate so far as to get someone kicked out of school. Also, this is Jags, not TOB, ... so we'll see what happens.

Brian: Well, if Smith is suspended from school Jags doesn't have a choice but to suspend him. We can only hope for the best possible outcome for everyone involved in this situation.