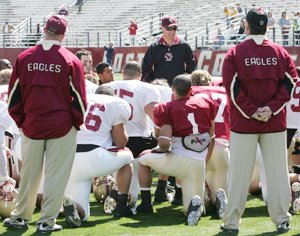 Brian: Jeff, the NFL draft wasn't the only football to be seen this weekend. Coming off an 11-3 season, BC went back to work Saturday in their annual Jay McGillis Spring Game. Your thoughts?

Jeff: Unfortunately, since neither of us were at the game, there is not a whole lot to say. Jags was worried about injuries so instead of a full scrimmage, they only played offense vs defense with a running clock. Crane and Davis had unimpressive numbers but I will give some credit to our defense which should be our strong side of the ball next year. Brian, did you learn anything about next year's team this weekend?

Brian: I didn't get the chance to watch the spring scrimmage but I did read up on it, and just as you say, the offensive performance seemed fairly lackluster. I don't want to place too much emphasis on the Spring Game as we are still a good 4+ months away from the season opener in Cleveland. But two things stand out to me on the offensive side of the ball. 1) It sounds like Crane is filling in nicely for Matt Ryan, and there is considerable distance on the depth chart between Crane and the backups by committee (e.g. Davis, Boek, Tuggle). And 2) a true freshmen stepping into the #1 spot at running back. Haden comes into this season with really high expectations but its really hard to have a big impact as an offensive player in your first season. Although it sounds like he might be getting some help with the possible return of Jeff Smith ...

Jeff: Yes, a return from Jeff Smith would be a great help and is a new, rather surprising development. Haden weighs less than 200 and is projected to carry the ball less than 20 times per game throughout his career similar to say CJ Spiller of Clemson. Help in the backfield is going to have to come from someone but also expect Crane or whomever is under center to be throwing a lot of passes despite their lack of game experience.

Brian: No doubt in my mind its going to be Crane under center. Also Crane being more mobile than Ryan will help the rushing attack, although either Mulrooney or Smith will have to step up to help share the load with Haden.