Share All sharing options for: Happy Time: Matt Ryan on Cover of NCAA 09 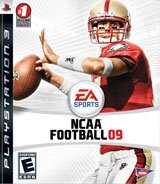 Brian: Happy Time Eagles (a day early) to Matt Ryan who landed on the Playstation 3 cover of NCAA Football 09.

NCAA Football 08 is a pretty good game ... check out the 09 version. Too bad that McFadden landed on the cover of the XBox version of the game. Admittedly, I'm a little upset I don't have a PS3 now.

Also, love the screenshots of #10 as the signal caller on the Heights! Check them out in the article.

Jeff: Unhappy Trails Brady Smith, you pled not guilty to rape charges but if the accuser's story is even partly true there is no room for you at Boston College. Rumor has it that Jags has already let you go and BC will move on regardless of the outcome of the case. Kudos to Jags for moving swiftly given the severity of the issue.