Today we work on another food chain. This time, we attempt to rank the top 5 out of conference football opponents that you want to see GDF schedule.

The team cannot already be on the schedule in the foreseeable future. Sorry, USC. Conversely, the Eagles cannot have played them in the past 8 years as an out-of-conference game. Peace out, Penn State. See what I did there? Our former Big East opponents are IN play. I'm just goading Jeff to lobby for the University of Connecticut here ...

The arrangement will be for a home-and-home series to be played at some point over the next 10 years. And no shenanigans like the stuff Notre Dame is trying to pull getting Big East teams to play in Gillette Stadium, Giants Stadium or other neutral site. The home game will be on the Heights.

We consider these eight teams and then rank them from 5-1.

Starting off in the SEC, I'm not going with some of the more obvious choices in UGA, Florida or SC. Every year BC plays in those markets in the ACC. So I'm pushing the Volunteers. Tennessee always has a great football team and a rich history. Neyland Stadium seats 102,037. I've seen the stadium which is quite impressive - just a massive wall of people. And I'm sure the Vols would show us Eagles the proper way to tailgate.

I really like what Mike Bellotti has done with the Oregon program over the last 13 years. Even though Autzen Stadium only seats 54,000, it is known to be one of the loudest and most intimidating atmospheres in all of college football. Added bonus: when the Eagles go into Autzen and win, I get ultimate bragging rights over my friend Omar. UCLA or Cal are trendy picks with all the alumni in LA and the Bay Area, but Oregon opens up a new market in the Pac 10 for the Eagles to get some exposure. 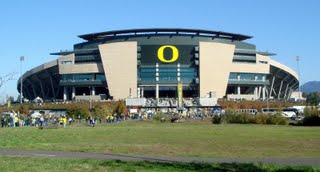 The Eagles in Autzen? ... Gene, pick up that phone!

One of the best programs of the last decade. Who wouldn't love a road trip to the other Death Valley? Death Valley always ranks in the Top 10 stadiums in the country, and was named the scariest place to play by ESPN. This also gets BC some exposure in Louisiana, a market they typically don't get to visit.

BC could schedule Hawaii every year just to beat up on them and eliminate them from BCS contention. And what's better than a Hawaii vacation in September?

Hook Em Horns! Our only Big XII representative, it was a tough decision between UT and the Sooners. But what is there to do in Oklahoma besides play football? A majority of blue-chip college and NFL draft picks come from the state, so the exposure will be great for the program and recruiting. Texas has a rich history and is guaranteed to be in the Top 25 annually. 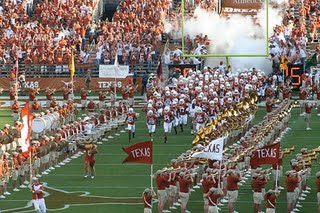 This matchup would get an SEC team on our schedule that we would expect to beat more often than not. Also, Vanderbilt and BC are on the same level academically which always adds to an athletic matchup. Downside (or upside?) - Vanderbilt hasn't had a winning record since 1982. Ouch.

BC and Wisconsin have been two of the top 10 two-sport programs in the country over the past 10 years. Throw in our ice hockey programs, and we might even be 1-2. Plus, Camp Randall is a fun place to play and the party atmosphere in Madison would be great. Bonus: Play in December as two cold weather schools duke it out in the same state as the famed Frozen Tundra of Lambeau.

How can we have a dream opponents list and not include the Gators. Perfect fall road trip for BCers to head to the warmth and see some beautiful women. Not to mention checking out one of the best college atmospheres in the country - The Swamp. Also, the birthplace of Gatorade, so its easy to stay hydrated in the Florida sun.

5. LSU - here's to hoping our success in one Death Valley spills over into the other Death Valley
4. Texas - a win against the premiere team in the Big XII would go a long way to righting the ship that is the national perception of ACC football
3. Oregon - their flashy Nike uniforms won't get the Ducks past the Eagles
2. Tennessee - Neyland Stadium. SEC football.
1. Wisconsin - we haven't played a Big Ten school since 2004 and this would be one of the better matchups the conference could offer up

Jeff: I guess flashy is one word to describe Oregon's uniforms, but you won't see any Pac 10 teams on my list.

5. Vanderbilt - winnable SEC matchup
4. Hawaii - I just can't even fathom BC losing to them
3. Wisconsin - already have recent history in hockey. Also, I've been to Madison and would love to go back for a game.
2. Florida - how could you not want to go to The Swamp? Bonus: the game will get tons of national attention
1. LSU - bring on the defending national champs!

I'm going to throw in Georgia for honorable mention because I've always wanted to go to Sanford Stadium.

Brian: Hawaii will be terrible for the next ten years. June Jones and the AD jumped ship. And Colt Brennan isn't walking through that door. Still, worth considering because ... it IS Hawaii ... in September.

Leave your thoughts in the comments section below.