Gerbe for Hobey and the Big Finish

Share All sharing options for: Gerbe for Hobey and the Big Finish

It's Friday on a weekend where there is no BC basketball or hockey to be seen, but we still go to the Big Finish. 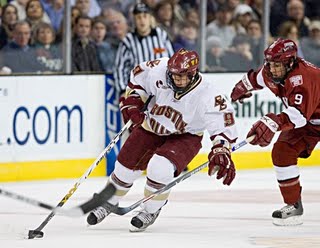 Brian: Nathan Gerbe was named as one of the 3 finalists for the Hobey Baker. Odds he takes home the hardware?

Jeff: Well in the one college hockey game I saw this season Ryan Jones from Miami (OH) looked pretty solid so I am going to go 20%.


Jeff: Baseball played UConn last week, a game the Eagles won 10-4. How long will it be before basketball or football plays the old Big East rival?

Brian: I hope never, but you know how the NCAA men's tournament selection committee works - looks for the storyline, likes to place BC up against old Big East foes like Georgetown and Villanova. I'm sure we'll see them in the tournament or in a POS bowl game before we schedule them again. Are they done suing us yet?


Brian: With the departure of Spears and Kaba, the Eagles are interested in 6'11" Maurice Sutton of Maryland. Sutton has also been courted by Marquette, Kentucky, and UNC, but Creen is out at Marquette, so more odds - chances the Eagles land the big man?

Jeff: This time of the year when most of the McDonalds All-Americans have already been signed is when BC starts to land some names that turn out to be studs like Jared Dudley. So I'm gonna show my faith in Skinner and say that Maurice Sutton will be an Eagle next year.


Brian: Last one, Jeff, what you more excited for this weekend, the Masters (as golf is near and dear to your heart) or the all-chalk Final Four?

Jeff: Stealing from PTI yesterday I see. Well I am going with the Final Four. College athletics is where it's at. The Masters is great but largely dependent on whether or not big names fill the leaderboard on the weekend.