Brian: UConn football coach Randy Edsall is waiting for the phone call from BC after inking a deal with Notre Dame yesterday (with 0 games at Rentschler Field!). Any chance GDF is itching to pick up the phone and call UConn?

Jeff: Unfortunately, Randy Edsall is not big enough yet to make that happen. Too many other people said ridiculous things when BC left the Big East and I would say it'll still be a few more years before a deal is signed. But what it should be is that BC-UConn play every year in Foxsboro and seats are split between the two schools.


Jeff: ESPN did a mock draft last night and I don't care nearly enough to watch it but as I flipped by I saw they were on pick #16 and Matt Ryan had not been taken yet. Is Kiper serious?

Brian: #12 will be fine tomorrow. If he slips down the draft board, I know he'll represent Boston College well and handle the situation with class and dignity. Not like this bozo. 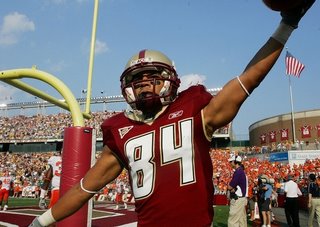 Jeff: Great move! Was he even going to be drafted anyway? And he is from Canada.

Brian: Challenger most likely would have gone undrafted and would have had to sign as a free agent. I'm happy for Challenger that he can go play close to home (Montreal native).

Brian: I'll either try to watch some of it on Saturday or check it out on Sunday. Excited to see Crane and Haden lead the offense.