Eagles One Win Away and the Big Finish

Share All sharing options for: Eagles One Win Away and the Big Finish 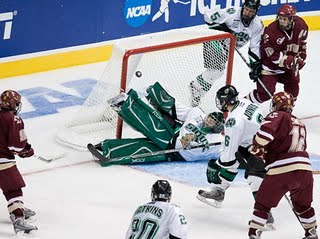 Jeff: Gerbe's shorthanded goal was very impressive and gave us a 2-0 lead at the time. At that point I expected a close game but halfway through the second period it was 6-0 and the Sioux were done.


Jeff: The Hobey Baker award will be announced tonight, 5:30pm on ESPNU. Does Gerbe take home the hardware?

Brian: I don't think he will as voting was completed earlier this week. If he doesn't win it, I demand a recount. Hopefully, though, Gerbe doesn't leave Denver without some hardware.

Jeff: I know I don't have any superior hockey analysis but the fact of the matter was that Notre Dame was playing good hockey heading into the game and played very well to beat Michigan in OT last night.

Brian: ... that, and some really poor netminding from Michigan's Billy Sauer.


Jeff: I am very excited about Saturday night's matchup against the Irish which will certainly add to the BC-ND rivalry/hatred.

Brian: I am equally excited but also a little nervous. I mean, on the one hand, it is Notre Dame hockey. On the other hand, Notre Dame HAS gone through two #1 seeds and the defending champs to get to the final. I expect a really good game. Jeff, where you watching the final?

Jeff: Wild Wings in Hilton Head! I am far more nervous for this game though because we are playing Notre Dame instead of Michigan. Losing to Notre Dame in hockey (and football nowadays) would be a major letdown but losing to Michigan would be bearable. Where are you watching the game?

Brian: I might take it easy tomorrow night, skip the NYC BC game watch and watch from home. I'm going to NHL playoff hockey - Rangers @ Devils - tonight with Christian. We sign off with a ESPN video preview of tomorrow's championship game with the best voice in hockey, Gary Thorne. Go Eagles!