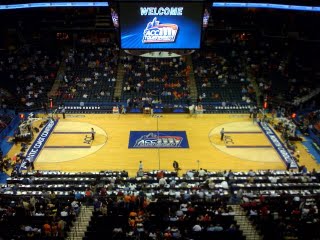 Jeff is on hand to watch a full day of basketball in Charlotte. He sends us this pic of the arena prior to the noon tip between (8) Wake Forest and (9) Florida State (in progress). Since we all can't be as lucky as Jeff, here is information from ATL Eagle regarding tonight's game watches and TV schedules.

For readers in the greater New York City metro area, read on.

You would think the "Worldwide Leader" would bump ESPNU Give N Go (whatever that is) for some extra ACC tournament action on ESPNU (which I actually get as part of Time Warner cable).

/cries as he takes out his credit card to shell out the $4.99 for ACC Select coverage

In NO WAY do I question BC's move from the Big East to the ACC, but its right around this time of year that I start to reminisce on having the Big East basketball tournament take place down the street at MSG (right in my backyard).