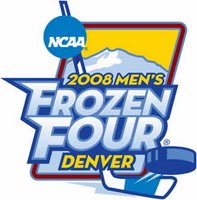 Good news for Eagles hockey fans. Admittedly I'm a bit surprised, but yesterday's latest USCHO's bracketology has the Eagles as a (2) seed in the upcoming NCAA hockey tournament. Encouraging, but BC isn't out of the water yet. They really have to take care of business this coming weekend against Providence. An early exit in the Hockey East tournament (or even worse, a sweep) to a bubble team like the Friars would really put a damper on our NCAA tournament and title hopes.

It is almost certain Hockey East will get 2 teams in and it is looking more likely that we will get 3. New Hampshire is in and BU's resume looks much stronger after running off 9 wins in their final 10 games (after dropping the opening round OT game to us in the Beanpot). BC's resume is bolstered by going 2-0-1 against UVM (#3 seed in the HE tournament) this season, and by their strength of schedule and their overall record, 17-11-8. BC is currently ranked #9/#10 nationally in the two NCAA ice hockey polls. Let's hope York has the boys ready for this coming weekend's matchup with PC.