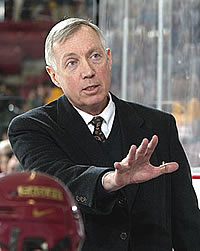 Brian: Jeff, you are head coach Jerry York. Welcome back to the blog. On Saturday, you go for your 800th collegiate victory in the NCAAs. 800?! That's a lot of wins. Seriously, when are we going to start naming stuff after you? York Hall? How about we replace that stone Eagle outside Conte with a bronze statue of yourself?

Jeff is Coach York: Well, BC already has Kelley Rink and Conte Forum so the two obvious choices are gone, but you know what I like? Getting those breakfast sandwiches from Hillsides! So maybe that can be called York Cafe or Jerry's Place. What do you think Brian?

Brian: You mean those Hillsides paninis? They are pretty good, Coach York, but I think you can shoot a little higher. You did bring us our first National Championship in 52 years. How about that controversial new athletic complex that they want to build on top of Edmonds? York Recreation Complex? The Y-Plex?


Jeff: You are Gene DeFilipo. Football season ticket renewals were due this week and the home schedule for next year is awesome featuring Virginia Tech, Clemson, and Notre Dame. Are you worried that season tickets are not sold out yet?

Brian is GDF: A little worried? I'm petrified. Where is the buzz and momentum from last year's dream 11-3 season? Why aren't these tickets being sold? I bring in the University of Notre Dame, giving the Eagles a chance to go for the jugular as the Irish are coming off a 3-9 season. Plus add to the ACC home slate Georgia Tech and Maryland, doesn't get much better than that. Sure, we don't have Miami or Florida State this year, but it's not like we are playing UNC or Duke at home, either. I'm just going to chalk this one up to the slumping economy, and hope that someone bails me out and buys these tickets. 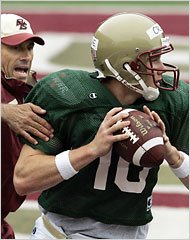 Jeff is Chris Crane: Yes. 3 TDs in my one start here at BC. Codi doesn't even know what division I football feels like and if those young guys we got were any good, they'd already be the frontrunner. Of those 3 TDs I had, 2 were rushing. Tell me when the last time Matt Ryan had 2 rushing TDs in a game was. I would liken my game to Tim Tebow, I can run and pass, and I'm ready to lead this team back to an ACC title game.

Brian: Chris, your 3 TDs were against I-AA Maine! Likening your game to a Heisman winner? A bold statement considering we have had ... 1 ... Heisman trophy winner, and the guy you're replacing didn't even end up on the short list. But I like your optimism, Chris. Here's to hoping you prove all your critics wrong.


Jeff: Last one, Brian. You are ACC coach Roy Williams of UNC. You are the number 1 overall seed in the tourney, and the deck is stacked in your favor because your first two sites are within 2 hours of campus. If your team doesn't go to San Antonio, should you be fired?

Brian is Roy Williams: Jeff, my team plays where the committee sends us. If the selection committee wants to reward us for being the #1 overall seed by allowing us to play the first two rounds in North Carolina, then that's what we'll do. Fired if we don't win? Not a chance. I'm a lifetime 558-133 (.807) coach. Not quite Jerry York-status, but still. I think if I destroy everyone's office pool bracket this coming weekend, I get a pass. Don't you think?

Jeff: I hate to be the bearer of bad news, Roy, but you won one national championship with Matt Daugherty's players. If you lose this weekend, lookout.