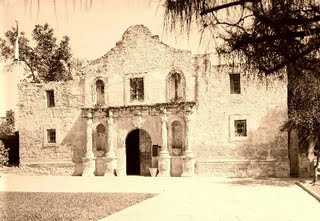 These teams best not forget the Alamo.

On to the Final Four! These are the teams Jeff and I think will prove to be the best four in all the land and make the trip to San Antonio. No disclaimer this time. If you've actually used this information to fill out your bracket, you officially have no hope of winning that office pool this year.

Let us know we are certifiably crazy in the comments section.

There is no doubt in Jeff's mind that the ACC is the best conference around this year. He has both the Tigers and the Tar Heels making the Final Four in a rematch of the ACC Championship (which he saw in person). I was impressed by what I saw in the Big XII final, and see both Texas and Kansas making the 4. We both agree on UCLA making the championship game. I see the West as the easiest road to the Final Four. Finally, I'm pulling for BC's own Bruce Pearl and his Volunteers to pull the upset in the Round of 8 and send Carolina packing.

Enjoy the games tomorrow, and go BC!