Brian: So the Big Dance moves on without BC. Because this fact saddens me greatly, I need to pique my interest in March Madness by beating down on Jeff with meaningless blog competitions. If you’ll remember, I cleaned up on our bowl predictions back in December. Expect more of the same. Disclaimer: Even though Jeff would argue otherwise, we are not college basketball experts. We accept no responsibility for completely taking your office pool's bracket and roundhouse-kicking it in the face. Read on at your own bracket's peril. As always, let us know your thoughts in the comments section.

First up, here’s a look at the East bracket, with the #1 overall seed from our very own Atlantic Coast Conference, North Carolina. 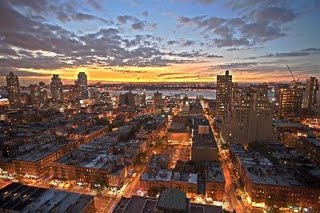 Ahh, the East: Don't be fooled though, the weather isn't that nice.

UNC is rightfully so the #1 seed in the tournament and therefore an easy pick to make it to the final four out of this bracket. Tennessee is a solid team but remember the SEC had a down year and they were unable to do well in their conference tournament. George Mason over Notre Dame in the first round is partially attributable to my hatred for ND and also because I believe the Big East is a little weaker than most do. Still a great conference, but I expect ND to lose or at least struggle to get past the first round.