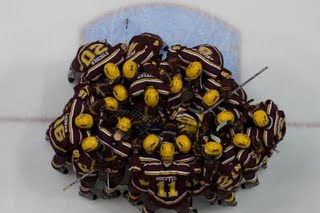 Next up: The Golden Gophers


Earlier today, the D-1 NCAA men's ice hockey tournament bracket was announced. Boston College has been awarded the #2 seed and will face #3 Minnesota Golden Gophers (19-16-9) in the first round of the tournament. Minnesota was a cinderella #7 seed in the WCHA tournament, but came up short in the title game, falling to Denver 2-1. The Eagles landed in the Northeast regional and are rewarded for winning the Hockey East tournament by getting to play down the Pike at Worcester's DCU Center. The opening round game is Saturday, March 29 at 7:30.

Should the Eagles advance, the road to the Frozen Four will go through the winner of the Air Force - Miami (Ohio) matchup. Miami (Ohio) is the #1 ranked team in the country (32-7-1) but fell to Michigan in the CCHA championship game, 2-1. Air Force captured the automatic berth from the Atlantic Hockey conference with a 5-4 2OT win over Mercyhurst. BC defeated Air Force 8-2 in the Dodge Holiday Classic Championship back in December.

Hockey East's only other representative is Hockey East regular season champ New Hampshire, who was awarded the #1 seed (4th overall) in the West regional. UNH's first round game is against a tough Notre Dame squad from the CCHA. And the road doesn't get any easier for UNH. Should the Wildcats get past the Irish, they will get the winner of Colorado College - Michigan State. The West's #2 seed Colorado College (28-9-1) is the #2 ranked team in the country and is hosting the West regional, which will be a virtual home game for the Tigers. BC fans are all too familiar with the West's #3 Michigan State (24-11-5), the defending national champions from the CCHA.

More headlines and analysis on Monday. Go BC!