Jeff: As we all know by now, BC won the Hockey East tournament with you in attendance on Saturday night. Anything more to tell us about the game?

Brian: Despite an anti-climatic game, it was good to finally see the Eagles in action this year and watch them raise the hardware in the Garden. There was a decent section of BC faithful in attendance and I was moderately impressed with attendance given that:
My one complaint was that we sat behind 4-5 older UNH fans who decided to stay for the championship. Complete sour grapes the entire night. Comments like "I can't believe this is the #3 seed in Hockey East (Vermont) ... shows how terrible the conference is this year." And "I can't believe the #4 seed in the conference is going to win the tourny championship." That, and a smattering of yelling for penalties that weren't there - "Interference!" No need for that. I felt like suggesting that if UNH had taken care of business in the semifinal up 4-1 late in the second period, that they wouldn't have had such a bitter Saturday night experience.

Jeff: Continuing with hockey, the Eagles will face Minnesota in the first round of the NCAA tournament. Expect an easy victory for BC after making it through the Hockey East tournament, right?

Brian: Nothing comes easy in the NCAAs, especially since the field expanded to 16 teams (the field was only 12 teams in 2001 when we won it all). The first round game is an interesting matchup since the Eagles and Gophers have faced each other quite a bit in the NCAA tournament. We have faced each other in the NCAAs 8 times, with each team winning 4 times. Minnesota leads the all-time series 14-10-2. I expect the game to be very competitive. Luckily for BC, we are playing great hockey and got hot at the perfect time of year. Freshman netminder Muse looked solid in his championship shutout performance. 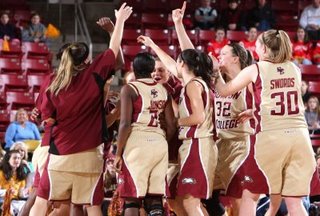 Brian: Boston College women begin their NIT tournament run tonight at Conte against Vermont, who beat Dartmouth easily in their opening round game. What do you expect out of the Eagles tonight?

Jeff: Our ladies have not had a game for over two weeks now so the beginning might be a little shaky, but in the end, I do not expect Vermont to go on the road and beat an ACC team regardless of how well they played a few nights ago.

Brian: The women Eagles have a point to prove after getting passed over for the National Tournament. I hope they can get the job done and keep their NIT title hopes alive tonight.


Brian: Jeff, you had 6 more wins than me in the first round and 2 more wins than me in the second? Impressive, but you have already lost a team you had in the National Championship (Clemson). I'm not panicked quite yet considering I still have all 4 of my Final Four teams in play. Ever the BC and ACC optimist, what do you think of the conference's performance now through two rounds?

Jeff: Clemson hurt my bracket big time, but I still would pick it the same way next time. Clemson just doesn't have any tournament experience and when they were at halftime up 12 against 'Nova they thought they had already won, but guess what? They didn't. Meanwhile, UNC has dominated and most people didn't even expect Miami to win their first round game but they instead nearly upset #2 Texas. Duke was not going to go to the Final Four but I was surprised about the way they lost to West Virginia, missing free throws as well as 3s.