Headlines: ACC Tournament Report and the Field of 65

Share All sharing options for: Headlines: ACC Tournament Report and the Field of 65 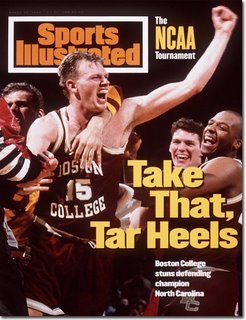 Jeff: On Saturday, before the semifinal games at the ACC tournament, I attended the ACC Legends brunch where Bill Curley was inducted as Boston College's representatives. Clearly, Bill never played in the ACC but was on the team that upset North Carolina in the NCAA tournament. In response to the obvious question he was asked he said that it was a great move for Boston College to move to the ACC and that a 16 team conference is too big and the fact that not every team makes the conference tourney is "stupid." Do you think Mr. Curley was sincere or was he just playing to the crowd? I thought he was but I am a biased observer.

Brian: I think he was being sincere. The move to the ACC has been great for us. Sure, we are coming off a season with a losing record, but to put that in perspective, we haven't had a losing season in basketball since the year BEFORE we were freshmen. We have been just a tad spoiled during our first few years in the ACC. Also, watching the ACC semis, after Clemson knocked off Duke, ESPN flashed a graphic that said it was the first ACC championship game for the Tigers since 1962. We accomplished that feat in year 1 in the ACC. So those saying that BC athletics have dropped off dramatically over the past year need to keep things in perspective.

Brian: A BC blogger and some ACC greats. Distinguished company!


Jeff: I was shocked yesterday when Virginia Tech was not included in the field of 65. Losing on a Tyler Hansbrough jumpshot with 0.8 seconds remaining is a tough way for your season to end. Had Virginia Tech won that game I would imagine they would've been seeded as high as Miami who recieved a 7 seed or higher. What a difference a game makes.

Brian: You have to feel for the Hokies who lost on a GW FG from Hansbrough and then had to witness possibly the lamest white-guy celebration after a game winning bucket, ever. There, I said it. Still, Va Tech is playing as good of basketball as anyone in the ACC right now (possibly even better than UNC), so I fully expect them to make it to NYC in the NIT.

Jeff: Finally, according to kenpom.com our final RPI ranking was 133. Our worst loss being to Robert Morris who finished ranked 135 but followed closely by the two losses to Virginia who finished ranked 127. Our best win came against Miami, ranked 34, followed by Rhode Island, ranked 76. Virginia Tech who I think got snubbed on Selection Sunday finished 52, one spot behind Villanova, but several spots ahead of Kentucky and Oregon who made the dance.

Also, Georgia was only 4-12 in conference play entering the SEC tourney and went on to win it. The SEC is hardly the ACC but it could've happened.

Brian: Our strength of schedule was pretty strong at 22. To think that we saw the #1 overall seed twice this year and two #2s (Duke and Kansas), we had a pretty awesome schedule. Congrats to the Georgia Bulldogs on winning the SEC in a crazy basketball weekend in Atlanta. Jeff, I know you were upset that the four ACC quarterfinal games you were in attendance for weren't competitive, but it could have been worse. The ACC tournament wasn't displaced by a tornado!