Brian: The blowout loss to Virginia Tech in men's hoops affected Jeff so deeply that he had to get out of town to clear his head and get some sun. So here is a rundown of today's and this past weekend's headlines. More analysis when Jeff is back tomorrow. 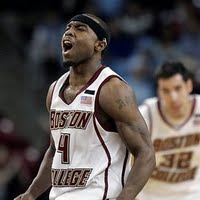 If you missed the game on Saturday, it was one for the record books. Here is Eagle in Atlanta's recap. Rice's 46 points and first half performance (8-8 from beyond the arc, 34 points) were incredible. I haven't seen an individual performance like that from an Eagle since Gionta's 5 goals in the first period of a 2001 game against Maine.

Jeff correctly predicted a win by the Eagles women's hoops team against Miami on Sunday. The women notch another win to improve their tournament resume. They go into the women's ACC tournament as the No. 7 seed. They will face #10 Virginia Tech in the first round, a team that they beat earlier in the season 63-53.


Sure, the Irish have a better men's hoops team this year, but we were able to knock them off in baseball yesterday, 7-2. The win comes after two straight losses over the weekend, both in extra innings - 15-14 in 11 innings to the Bonnies on Saturday, and 16-14 in 10 innings to Lehigh.


After my ACC Select disappointment on Friday night, the men's ice hockey team skated to a 2-2 tie with Providence. The 1 point kept us tied for 4th with Providence in Hockey East. If the season ended today, we would see Providence yet again for 3 games in the Hockey East quarterfinals. Bad news for the Eagles considering we couldn't find a way to beat the Friars in the regular season.

The women's hockey team recorded a win and a tie this weekend against Providence, but it wasn't enough to get past Boston University for fourth place in Hockey East. The women Terriers captured the final seed in the women's Hockey East tournament with a weekend sweep of Northeastern.