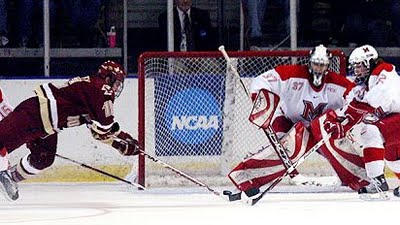 Brian: Boston College joins North Dakota, Michigan and Notre Dame in this year's Frozen Four, after dispatching the #1 seed Miami (Ohio) 12:12 into OT. Jeff, you were watching the game yesterday, the first game of the year you could watch down in SC. Break down what you saw.

Jeff: Early on I thought about turning the game off. BC got completely out-played early and looked like they were smaller, less physical and less skilled. They settled down in the second period though and had that amazing 3 goal stretch where Miami did not know what hit them. Once they headed to OT I was nervous but somewhat optimistic at the same time.

Brian: BC did come out of the gate slow, much like they did in the Hockey East final. Perhaps playing the night before on short rest can be attributed to BC's lethargic first period play. In the second period, BC really got their transition game going, which is their bread and butter (really capitalizing on their speed). The third period seemed more like they were trying to hunker down on the 3-2 lead, but they gave up the equilizer to Jones. Then in OT, getting completely outplayed, with only Muse keeping us in the game, Coach York calls a timeout to settle the team. 3 minutes later freshman Joe Whitney is the hero, a sick swat at a Zatkoff rebound out front (Whitney's tally ended up being the #2 Top Play on SportsCenter this morning).

BC hockey 'expert' Christian is over to watch the game with our girlfriends. Cablevision doesn't carry ESPNU, TimeWarner does. Whitney knocks one in the back of the net, he and I jump up, scream, begin to celebrate. Amid all the excitement, in a momentary lapse of judgment (?), we find ourselves hugging each other and not our girlfriends. Something is wrong with this picture. Perhaps I let my [hetero?] man-crush on York and the Eagles get the best of me.

Jeff: No comment. I celebrated the win with a BC '90 couple down here on vacation and there were no hugs, just high fives. There is a potential BC-ND game for the national championship now, how great would that be?

Brian: Boston College v. Notre Dame would be a great addition to our long-standing rivalry with the Irish, seeing as the Irish stunk up the joint last year in football. For this game to happen, though, we have to get past the other ND in the semifinal Thursday in Denver. And Notre Dame needs to continue their Cinderella tournament by knocking off the #1 team in the country, Michigan. We are no stranger to North Dakota in the NCAAs (and the Frozen Four), having sent the Fighting Sioux home packing the last two national semifinals. BC-North Dakota also skated to a 0-0 tie in Chestnut Hill this fall, a game that was suspended after 2 periods due to poor ice conditions. North Dakota holds a 11-9 edge in the all-time series.

Jeff: Watching the game yesterday once again reminded me that hockey is so much beter in person than on TV. I was a little surprised the arena was not packed with more BC fans but there was a decent showing of students and other fans. Unfortunately the Frozen Four is in Denver so I doubt there will be too much BC support in the stands.

Brian: I'm still trying to work out whether I can make the trip to Denver. We'll have much more Frozen Four coverage over the next two weeks. Go Eagles!