All is not lost. We may be the #11 seed going into this weekend’s ACC Tournament, but, hey, stranger things have happened. So get happy.

Happy Birthday JoLonn Dunbar. The emotional leader of last year's defense, Dunbar had an outstanding 4-year career at linebacker with the Eagles. Dunbar was named the 2006 Meineke Car Care Bowl MVP, falling on the fumbled option pitch on the Navy 40 yard line with 1:43 to play to set up the game-winning field goal. JoLonn projects to be a second day pick in the upcoming 2008 NFL Draft. Best of luck to him and the other BC seniors on draft day. 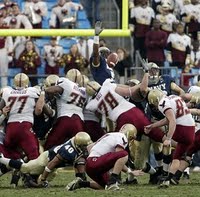 Happy Birthday, and thanks for giving us fans this: our 7th straight bowl win.

Happy Anniversary to the men’s basketball team. On this day 11 years ago, you knocked off Valparaiso 73-66 in a #5 v #12 first round matchup of the 1997 NCAA men’s basketball tournament. The Eagles were led by Danya Abrams (16 points, 12 boards) and Bevan Thomas off the bench in the come-from-behind win. The victory celebration was short-lived, however, as the Jim O’Brien led Eagles failed to advance beyond the first weekend. BC was bounced in the Round of 32 to the #4 seed St. Joseph’s Hawks in overtime, 81-77. The Hawks sunk the Eagles behind 14 three-pointers.

Happy Trails to the women’s lacrosse teams win streak over the Fairfield Stags. Fairfield defeated the Eagles 14-12 yesterday in non-conference play, the first victory over our Eagles in the 8 game history of the series. The loss drops the Eagles to 1-4. The team kicks off ACC play this Saturday against Virginia Tech at Babson College in Wellesley.