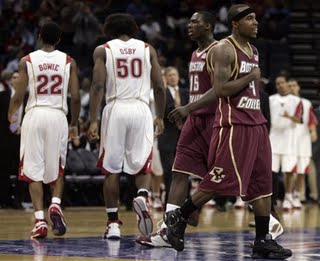 Brian: Jeff mails in his thoughts on the 71-68 upset win last night against #6 seeded Maryland. Next up for the Eagles: the #3 seed Clemson Tigers tonight at 9:30pm.

Jeff: Great win for the Eagles tonight and it was great to be there despite it being a true nailbiter. I'm going to pretend the first 12 minutes of the game didn't happen so I can say good things about our team.

Our big men played GREAT. Oates didn't score but rebounded and played good defense. Basically same goes for Blair. Meanwile Spears scored when it seemed no one else could and Southern's scoring from the low post was desperately needed and is rarely seen in a BC game.
Paris, Rice, Sanders, and Raji all had at least one great play on both ends of the floor.

If you somehow didn't watch the game BC went from down 15 in the first half to up 10 late in the second and then promptly threw the ball away 3 times to let the final score be very close. A bunch of shots did not drop tonight and the team could've gotten more calls in the paint, but if the big men play like they did in the second half against Clemson, this lowly #11 seed could make the semis!