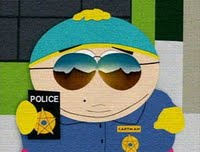 Brian as Good Cop: Saturday's individual display from beyond the arc was just awesome, and we still lost. What more can Rice do for this team? The fans have given up on this team this year, we are losing our two senior big men and no one plays defense. Why suffer through another 4-12 ACC season while receiving all sorts of individual accolades? Go get paid! Make some money in the pros.

Jeff as Bad Cop: Rice leave early? Why are we even talking about this? You know what the NBA likes? Big bodies. Look at Sean Williams and you see someone who got kicked out of school but still went in the first round because he had size, athletic ability and potential. The NBA doesn't want some overachieving College player from a bad team. Stay in school Rice, leaving would be a mistake.

Brian as Good Cop: Two words for you, Jeff. Chris. Paul. How'd leaving early work out for a fellow ACC guard? Also, Allen Iverson. Rice is an inch taller than both those dudes. So don't give me the size argument. Athletic ability? Well, if you saw the display on Saturday, you'd be singing a different tune on this one.

Jeff as Bad Cop: You mean Bad Cop Jeff. Chris Paul was awesome in college and his team actually won with him running the show. Wake Forest went 48-16 in his two years there and dropped to 17-17 after he left. Rice is not getting drafted in the first round whenever he leaves BC.

Jeff as Good Cop: Ryan is going #1. This surprises even me but its true. When you have the number 1 pick in the draft you don't draft a defensive lineman the way the Texans passed up Reggie Bush, you draft an offensive stud. And as the second best quarterback to ever come out of BC (sorry Matt Hasselbeck) that is what Matt Ryan is, a stud. Girls love him more than Barack Obama and guys want to be him more than Tom Brady.

Brian as Bad Cop: #1 is a lot of pressure and I don't want that for my man Matty. It looks like the Dolphins are stuck with the #1 pick, but they need a lot more than just a QB. There are plenty of free agent QBs on the market. Sure up either the offensive or defensive lines by picking one of the Longs (OT Jake Long or DE Chris Long) with the #1 pick and go out and get a free agent QB.

Brian as Bad Cop: I started to wonder this on Friday night, but why isn't York at least giving a game or two to BC's backups (Margolin/Kremer)? For the 8 years that I've followed BC hockey, this is the first year York has gone with 1 netminder the entire season. In years past, we've had Schneider/Pearce, Kaltiainen/Schneider, Kaltiainen/Kelleher, and Clemmensen/Kelleher. But this year, its all on John Muse. His confidence seemed completely shot in our 3-2 loss to Providence. Seems to make sense to me to have thrown Kremer or Margolin in for at least a game or two.

Jeff as Good Cop: You are questioning Jerry York? The greatest college hockey coach of all time? What York sees that you don't is practice. Obviously these backups stink and have have no skill. Otherwise York would be playing them. How dare you question him.


Suspect #4: Red Sox beat down of the Eagles

Brian as Bad Cop: You are World Series champs and are beating down on a bunch of college kids ... by 24 runs. Did Big Papi use a metal bat in this game? How many runs give you a comfortable lead, here? This was a disgusting display and the Red Sox should be ashamed of themselves. I hope the Eagles are so disappointed that the Red Sox didn't let them hang with them that they defect and cheer for the Yankees this year.

Jeff as Good Cop: The Eagles have had some good baseball teams the last few years but this might not be one of them. The Eagles have played tight with the Sox before however this was sad, but also meaningless so BC just needs to shake it off before conference play.