Share All sharing options for: NCAA Ice Hockey Tournament and the Big Finish 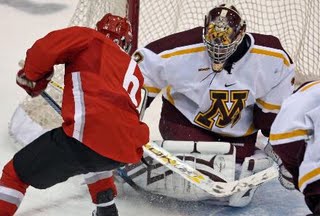 Jeff: Where is the game being played? Wooster, Massachusetts? Advantage EAGLES.

Brian: Playing in Worcester is a nice reward for winning Hockey East. BC has been placed in Worcester 3 times and has advanced to the next round twice, including in 2001 when we won it all.


Jeff: York goes for career win #800 against the Gophers. Quick questions: best York win at BC, and the toughest loss?

Brian: Best win was definitely the 3-2 OT victory against North Dakota for the title. There are a bunch of tough losses, especially in the Frozen Four. But the one that hurts the most has to be the 2-1 loss to Maine in the 2004 semifinal. We lost to a Hockey East rival, were clearly the more talented team, and had a chance to win another title in our backyard (Boston Garden).


Jeff: You lost a Final Four team in Tennessee last night. Give me your new Final Four based on what you've watched so far and who's still alive.

Brian: I was really pulling for BC alum Bruce Pearl, but they looked terrible last night. As much as it pains me to do so, I'll take UNC in a close one over Louisville. That gives me UNC, Kansas, Texas and UCLA, which would be 1 off from my original picks.


Brian: Last one, BC will live and die in this tournament on the play of Hobey-hopeful Nathan Gerbe. Make a prediction - how many points does Gerbe tally tomorrow?

Jeff: You're telling me that Minnesota's goalie is playing well so I'm going to say only 1 point for Gerbe but I wouldn't mind being wrong.