A Rivalry Born with the Terps? and the Big Finish

Share All sharing options for: A Rivalry Born with the Terps? and the Big Finish

Brian: Jeff is on the road in Charlotte to watch your #11 seed Eagles try to make two in a row tonight against #3 seed Clemson. So we bring in BC Interruption's Northeastern "bureau chief" and our good friend Andy, for the big finish.


Andy: With BC's win over Maryland yesterday, the Eagles have beat Maryland twice this season and possibly sent UMD to the NIT. During the football season, Maryland handed the Eagles an unexpected 42-35 loss that may have ruined BC's BCS hopes. Brian, do you see a rivalry growing between these two schools?

Brian: An interesting question. I do see a growing rivalry forming here. And the ACC seems to recognize (or further) the rivalry with their curious scheduling - we always open the ACC basketball schedule with Maryland in December, and always play Maryland in football late in November, when the ACC Atlantic race heats up. Add to this the fact that Maryland is our closest geographic neighbor, lots of BC alumni are from or currently live in the Baltimore/DC area, and our bball teams have the Gary Williams tie-in, and this could become one of the better rivalries in our new conference. 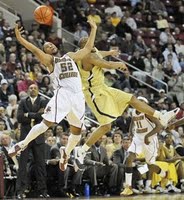 Brian: Andy, during last night's game, you text messaged me "I have a man-crush on Josh Southern." Here's your chance to publicly state your reasons why.

Andy: Josh Southern is my favorite of the four freshmen who have played this year. That text was sent after Southern scored a huge bucket with just under four minutes remaining in the game. He had 10 points, 8 rebounds, 3 assists, and a block in last night's game. Southern plays well in big games and has taken advantage of the recent increase in playing time. Unlike BC's other big men, he has the ability to score in the low post with his back to the basket. I am optimistic about next year's Eagles team since Southern has emerged as a quality low post scorer.


Andy: Last night's win against Maryland probably spoiled any chance they had to get into the NCAA tournament. Florida State needs to beat UNC to have a chance. Miami won yesterday, but may still have work to do. Brian, any chance the ACC gets the same number of bids as the WCC (likely to get 3)?

Brian: I'd give that only a 1% chance! I am going to stick with my prediction on Wednesday that the ACC gets 4 teams in. The only scenario I see only 3 teams getting in is if VTech blows out Miami, FSU doesn't pull off the upset today, and Virginia Tech doesn't make it to the ACC championship game. Compound this scenario with 2-3 other conferences' auto bids falling in the wrong hands and its slightly possible, but certainly not probable. But thank you for also mentioning my side interest in this year's WCC. Saint Mary's deserves to get in. Do the right thing, committee. This is the year of the mid-major.


Brian: Last one, a huge BC sports night tonight - Boston College v. Providence in game 1 of the Hockey East quarterfinals at 7pm, and BC v. Clemson in the ACC quarterfinals. Make a prediction (or two)!

Andy: I think that Jerry York and the Eagles will get it done tonight. My only reservation is that the Friars have played well this season against BC and their fans seem to love making the trip to Conte Forum. The Eagles can beat Clemson tonight if they get a better effort from Tyrese Rice. Last night he had just 2 points in the first half. Clemson is a solid team with good big men and some talented outside scorers. Every game is a must-win for the Eagles, so I give them the edge.


Brian: Andy, many thanks for filling in for Jeff. We will have to have you on more often. Have a great weekend and enjoy all the BC games!