Share All sharing options for: Under the Radar: Boston College Women's Lacrosse

We here at BC Interruption wanted to shine the spotlight on some of the other D-I varsity sports here at BC that fly under the radar. Even though we focus a majority of the content on this blog towards the revenue-generating sports (men’s basketball and college football), these representatives of the Heights are no more or less Eagles than Coach Jags or Coach Skinner’s squads. 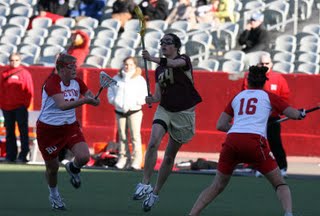 This year’s lacrosse team dropped its season opener on Sunday to #6 Maryland, 23-10 at Bentley College. They have to play the road warrior this season as they wait for their home field on the Newton Campus to be remodeled. They will play home games at Bentley College, Babson College and Westwood High School. Last year’s squad went 6-11, 1-4 in the talent-rich Atlantic Coast Conference. The other ACC schools that field women’s lacrosse teams are Maryland, UVA, Duke, UNC and Virginia Tech. To give some indication as to how strong the ACC is for women’s lacrosse, four ACC schools finished in the year-end media polls ranked in the top 5.

The Lady Eagles get a rare treat in a west coast trip starting this weekend as they take on St. Mary’s college Sunday, March 2 and Stanford on March 5.

Leave any other interesting factoids or comments about the team in the comment section below.

Best of luck ladies on a successful 2008 season!