Share All sharing options for: Headlines: Recruits and Hoops 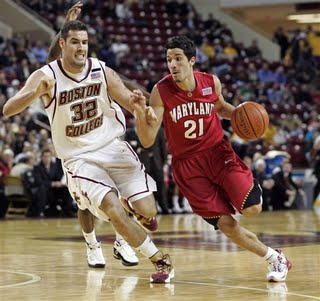 Jeff: By now anyone who follows Boston College enough to be reading this website knows that BC lost last night to Maryland by 5. There are a lot of goods and bads I saw in the game, but let's talk about what we saw in the stands. A LOT of empty seats. I understand weather might not have been great in Chestnut Hill last night but the weather should not play a factor into whether or not students show up. It was pathetic. Student sections were less than half full. If the students don't show up for Maryland I think it is then clear that they only care about UNC and Duke unless our ball team is in the top 25. I am dissapointed we have to talk about lack of fan support for BC AGAIN.

Brian: It was supposed to be Rivalry week on ESPN. Even though that label is some ESPN manufactured moniker to label the college basketball games of the week, you wouldn't have known it was rivalry week in looking in the stands. As you say, Jeff, very disappointing. And what was up with the Maryland fan sitting in the seats behind the basket? Did you see that?

Jeff: Well it was easy for that Maryland fan to get behind the basket because at tipoff there were not even enough students to fill the front rows. So sad.

Brian: Congratulations to Gary Williams on reaching his 600th career win. Williams was the Boston College coach in the early 80s when the Big East was just forming, and won 76 of those 600 games for the Eagles.


Jeff: National signing day was yesterday, BC signed 29 players. What did you like most about the class?

Brian: I try not to get too wrapped up in the recruiting process since I think that the gains from national signing day are realized much further down the line and recruiting rating services accuracy are marginal at best. I don't want to watch a ridiculous, cheezy, over the top press conference with a 17 year old kid picking one hat over another. That being said, I like a few things about the recruiting class.

Jeff: The two highlights of the recruiting class for me are the two QBs we have coming in and then stealing two players from SEC schools. Josh Haden was heavily recruited by Florida and then as Brian mentioned Ugo Okpara had originally committed to Arkansas. Getting back to the quarterbacks, I am hoping Cody Boek is the next Paul Peterson (my all-time favorite BC QB). And in my mind he will be until he proves otherwise or fails to win the starting job.