Share All sharing options for: Headlines: Swept By UNH

Jeff: When the basketball team struggles I usually turn to hockey to find something to cheer about but not the case this weekend. UNH handed the Eagles two losses. What happened there? 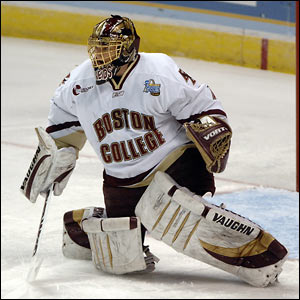 Brian: Being in New York, I was unable to watch either game. So any analysis on the game I gathered from the reading articles online. In Saturday night's game, the power play absolutely killed us. We were 0 for 7 with the man advantage (not to mention 0 for 2 on Friday night). You can't expect to win when you miss those opportunities. Also, after the initial Hobey Baker hype, where is Nathan Gerbe? Since recording a 4 point night on February 8 against UMass Amherst, Gerbe has had about as quiet a February as anyone can have. 5 games, 0 goals, 1 assist. The Eagles have gone 2-3 (1-3 in Hockey East) in that stretch. Has the pressure finally cooled Gerbe and his red hot season?

Jeff: So much for Gerbe being the next Brian Gionta. The pressure can get to these kids though. Just talk to reigning SEC POY Chris Lofton of Tennessee who only hit one FG (which was a layup) in their win against Memphis. Its a lot easier to score when no one knows who you are. Still think the Eagles win the Hockey East Tournament?

Brian: The Hockey East tournament picture is looking bleaker. BC is now in 4th place with four games to play. Over the weekend, both BU and Vermont had 4 point weekends to jump 1 point ahead of the Eagles. Both the Terriers and Catamounts are in the driver's seat too for the remaining 4 games:
Not to mention that Northeastern and Providence are only 2 points behind the Eagles.

If the season ended today, we would play Northeastern with the home ice advantage in a 4 v. 5 first round Hockey East tournament matchup. Luckily, the season doesn't, and there's more hockey to play. But the margin of error for the Eagles is becoming much smaller. Ideally, we need to go into the HE tournament as a #2 or #3 seed to avoid playing New Hampshire before the championship game (the tournament does reseed after the quarterfinals, however, if the seeds hold true in the quarters, as the #4 seed, we would see #1 UNH in the semi).

The decision to buy Hockey East championship tickets is looking less promising at this point in the season. Here's to hoping the Eagles win out and go into the tournament as the #2, and are playing in the Garden on Saturday with me in attendance.

NOTABLE STAT: With the weekend sweep, New Hampshire has now beaten the Eagles the last 5 games and achieved its 12th consecutive 20 win season. An incredible accomplishment, considering the Eagles have only had 5 straight 20 win seasons (in 2001-2002, we ended the season at 18 wins). What is even more incredible is that New Hampshire has never won a National Championship in men's hockey (they have 1 in women's hockey). Could this be the year that UNH breaks through and wins the title? Let's hope not and hope that the Eagles make some noise in the HE tournament and the NCAAs.