Headlines: Another Loss to the Cavaliers

Share All sharing options for: Headlines: Another Loss to the Cavaliers 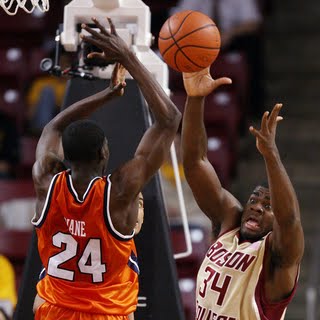 Brian: Jeff, BC men's hoops lost another frustrating game to the Cavaliers of Virginia on Sunday to drop to 4-7 in ACC play. I was not able to watch the game on Sunday. Break it down for me.

Jeff: BC lost this game twice, yes twice. In the first half the Eagles went from up 10 to down ten after a long boring stretch of missed shots and turnovers. Then in the second half Boston College tried to get the lead back by shooting exclusively 3s for a stretch while there was still time left in the game. BC shot 14 3-pointers in the second half, hitting only 4. Meanwhile, Virginia shot 9-18 for the game. BC could've played better defense throughout but I blame these two stretches on why BC didn't come out with a W.

Do we blame Skinner? Possibly.
Do we blame the complete lack of students in the stands? Probably.

A home crowd usually makes it difficult for the away team to go on any long runs. The crowd of 7,154 on Sunday was quiet in large part because it consisted of 7,000 general admission and at most 154 students and i mean at most. The students have clearly given up on this team. They'll be at UNC for sure but they will not be at the Georgia Tech game because that falls over their spring break and I doubt many are making the trip to Charlotte for the ACC tournament.

Brian: Frustrating to say the least. Although I don't know if you can blame the fans for this L, Jeff. On the bright side, due to another odd quirk in our ACC slate, we have a week to work out the kinks before traveling to Tallahassee Saturday to take on Florida State (14-12, 3-8 ACC).

Jeff: No you probably don't blame the fans but there has been no home court advantage for this team this year.

Boston College is 4-7 in conference with games against FSU, VT, Miami and GT left whom all have losing conference records. Then throw in one home game against UNC. I believe that this team can get to 8-8 and I give them a chance to beat UNC in Conte. You and I both know that 8-8 in the ACC puts you at least on the bubble for the NCAA, 9-7 would get you in. Don't count this team out of the dance until they get that 9th loss, which I don't think they will get.

Brian: Ever the optimist, Jeff. I see BC going 3-2 in this stretch, pushing the Eagles to 16-13 (7-9). This doesn't factor in the ACC tournament. As you say, clearly not a tournament worthy resume, but I see this team making the N.I.T. and making some noise.