Headlines: A Weekend To Forget

Share All sharing options for: Headlines: A Weekend To Forget

Brian: A forgettable weekend for Eagles (and New England) sports. First, the men's hockey team was upset by Providence. Then the men's hoops team was blown out of Littlejohn in the second half. Then the Patriots were upset by my New York football Giants in Super Bowl XLII. Jeff, let's start with men's hoops as you were in attendance Saturday night. Break it down for the readers. 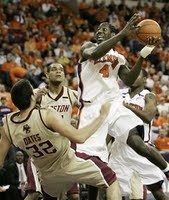 Jeff: It wasn't pretty Brian. I'm sure you watched the game and saw much of the same I saw like 3 shot clock violations early in the first half, and BC getting killed for rebounds and being completely unable to get into their offense for much of the game. But really as a fan seeing the shot clock violations was most painful. You would certainly think that at some point they could at least chuck up a three and hope for an offensive board rather than during all three violations the buzzer sounded mid pass rather than even someone trying to get a shot up.

As we touched on before the game, Clemson had two key injuries Satruday and the Eagles still got thumped. This week coming up we play Maryland at home who we already beat once so you would think there is a chance for a victory there but since we played in december, Maryland has several good wins including a great win at UNC. Meanwhile, the Eagles have several 20 point losses. Then later in the week the Eagles head to Durham to play a top 5 team in Duke so you can just mark that down as a loss right now. My feelings towards this year's basketball team have gone way south since they had that impressive victory over Wake Forest to go to 2-0 in ACC play.

As far as seeing a game at Clemson, it was another enjoyable road trip. It felt like going to an NBA game with the lights going out and all the fanfare they had before Clemson ran out on the court and as they announced their starting lineup. Then at half time we were entertained by a good dance team and then a team of elementary school unicyclers? Can you ride a unicycle, Brian? I doubt I can and here were 6-10 year olds doing all kind of tricks including jumping rope while on a unicycle! I looked for a video on youtube and couldn't find anything for that team but I'll tell you that that alone was worth the price of admisison.

What can you tell me about our hockey team?

Brian: I didn't get to watch the game so I'm left to analyze the game through the tea leaves of box scores and Hockeyeastonline recaps. BC went down early in the first period 2-0, only to storm back in the second period and knot the game at 2. Goals by Kyle Kucharski and Matt Greene's 8th of the season. In the third, Providence scored the game winner at 15:33. In typical BC fashion, we outshot Providence 38-23 and 14-5 in the third period. Frustrating to say the least.

BC now turns their attention to the Jack Parker Memorial Tournament tonight (8pm) in its first round matchup against Boston University. Here is an interesting read on the importance of the Beanpot written by a BU fan. Without question, regardless of the recent success of the Terriers in this tournament, Boston College has been the more dominant program vis a vis our archrivals down the B line. Let's hope for a BC victory tonight.