Let us dispense with the happys on Valentine’s Day.

A posthumous Happy Birthday to Francis Valentine Joseph "Frank" Hussey. Frank was a gold medal winner for the US in the team 4 x 100m relay during the Games of the VIII Olympiad in Paris, France. Frank later matriculated at Boston College and ran men’s outdoor track, breaking records in the 100m and 200m events. In a bizarre sequence of events, Frank failed to qualify for the 1928 summer games in Amsterdam, so he and three other athletes stowed away on the S.S. President Roosevelt in hopes of attending the Olympics. 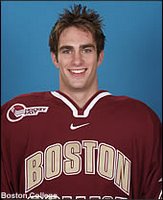 Happy Trails to BC hockey alumni (this courtesy of our reader christian). Patrick Eaves was traded with Joe Corvo from the Ottawa Senators to the Carolina Hurricanes for Cory Stillman and Mike Commodore. Eaves would have been reunited with J.D. Justin Forrest in Carolina, however Forrest was traded from Carolina to the San Jose Sharks for the ambiguous "future considerations." Forrest will be assigned to the Sharks affiliate in Massachusetts, the Woostah Sharks of the AHL (see what I did there?).

Happy Anniversary to the Beanpot champs. On this day in 1983, the Boston College men defeated Northeastern 8-2 in the Beanpot final. Then in 1994, BC needed a pair of OT victories to dispense of Northeastern and Harvard to win the ‘Pot. This pair of Valentine’s Day championship wins gave BC their 10th and 11th Beanpot championships. And until this past Monday's final, 1994 marked the last time BU did not play in the championship game.