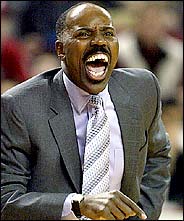 Jeff: Shifting gears to basketball, the Eagles shot well Saturday and were leading much of the game down in Durham before losing by 10. Hopefully the young Eagles can gain some confidence from playing well on the road but unfortunately that is still another L and extends the streak to 6 losses in a row in conference.

Brian: I DVRed the game on Saturday (admittedly not giving the Eagles any chance of winning) and was out with my girlfriend in the city when a friend texted me the score. So we finished up lunch, I turned off my cell phone (so as to not get any text messages, e.g. "OMFG Rice is a beast. Coach K is crying. Eagles win!"), I ran home and watched the game in its entirety. Of course, being tied late gave me a little bit of false hope that the Eagles could pull off the upset. Some observations:

Jeff: The Eagles played well enough to keep it close, not to win. If they hadn't shot well in the first half they would not have been leading at halftime. The Eagles' turnovers hurt them yes but it was not an astounding number. This team gets turned over by almost every opponent and Duke turns everyone over so I thought the turnovers could've been even worse and if they played again would be only slightly better at best.