Heels in Conte and the Big Finish

Share All sharing options for: Heels in Conte and the Big Finish 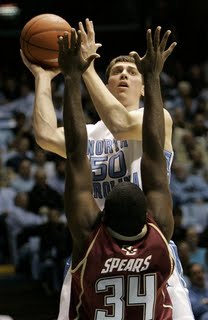 Jeff: Brian, (not so) big game against UNC tomorrow at Conte, you gonna be there?

Brian: Unfortunately, no. It is on ABC at 3:30pm. Looks like a majority of readers expect it to be a blowout anyhow.

Jeff: I'm trying to stay positive about the Eagles but after the ugly loss to Virginia Tech, it is difficult so I refrain from predicting a score or outcome.


Brian: We move to hockey. An article in the Globe about Massachusetts HS phenom Peter Starrett. BU, BC and Harvard are actively recruiting him. Chances he lands with the Eagles?

Jeff: If you're a star hockey player, why would you not go to BC?

Brian: This guy got a 800 on the math portion of the SAT. I think if he wants a Harvard education (with all due respect to my education at BC), more power to him.

Brian: I will be optimistic and say we make it a 4 point weekend. We desperately need the 4 points to stay apace in Hockey East.


Brian: Last one, women's basketball hopes to make the tournament. Minor setback last night in their 67-57 loss to the Cavaliers. Their last regular season game is this Sunday in Miami. Make a prediction.

Jeff: The freshman Storm and the Eagles get it done. I predict a win.