Tyrese Rice and the Big Finish

Share All sharing options for: Tyrese Rice and the Big Finish 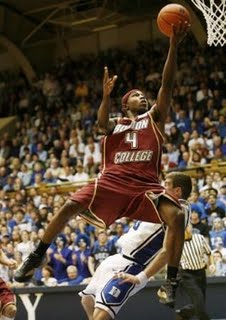 Jeff: Nice article praising Rice in the Herald this morning. In it he basically says what I stated earlier this week that the Eagles can win out the rest of the way and make the dance. Which puts a lot of weight on this game in Tallahassee tomorrow. Boston College needs a win tomorrow to get things started back in the right direction again. Florida State is very beatable and being an afternoon game on Saturday at a football school with a 4-8 conference record I don't expect the crowd to be an issue.

Brian: We are not making the Dance. I'm so happy that the Herald reaffirms your misplaced optimism, Jeff.


Brian: Huge Hockey East battle this weekend starting tonight in Chestnut Hill (on NESN). #2 New Hampshire vs. your #7 Eagles in a home-and-home. 6 points separate the two teams. Make a prediction.

Jeff: I'm going to go conservative and predict a split. We hoped that the Eagles would be fewer than 6 points back at this point and the Eagles just need to play some good hockey and get ready for the tournaments.


Brian: 80th Academy Awards this weekend. As I know you just love movies, best picture. Who ya got?

Jeff: Finding Nemo? Is that up for any awards?

Brian: Let's be thankful this is not weekly banter on pop culture. Best picture and director - No Country for Old Men, best actor - Daniel Day Lewis (There Will Be Blood).

Jeff: Other than the Academy Awards, what else you watching this weekend? Gonna watch BC-FSU? Or am I gonna have to keep you updated via text messages?

Brian: The BC game is not on television up north, text updates would be appreciated. I'll be shoveling out the walkways in Brooklyn. Great weekend for college hoops all around, capped with #1 Memphis hosting #2 Tennessee Saturday at 9pm.

Jeff: Other than basketball I might not turn on the TV this weekend. Andy comes into town Sunday, hopefully we'll be playing some golf if the weather cooperates.