Toss Up: A Look at the Football Schedule

Share All sharing options for: Toss Up: A Look at the Football Schedule

Toss Up - Better month for football next year - October (with games at Florida State and home against Clemson and Virginia Tech) or November (with three trips to the state of North Carolina and home games against Maryland and Notre Dame)?

Brian: The answer HAS to be November. An opportunity to beat down on lowly Notre Dame, push our winning streak to 6 games over the Irish. Four ACC games, 3 Atlantic matchups that will determine who goes to the ACC Championship game. Re-finding our winning ways against Maryland. A Thanksgiving reunion with TOB and the gang. And lest we forget, we are 0-3 in the ACC in the state of North Carolina (regular season games), so we'll need 3 wins in November to push our record in the state back to .500.

Jeff: I would love to attend all of the October games next season but the problem is that we will be underdogs in and might lose all 3 games. We could start out 4-0, lose three straight and still finish 9-3, so as a Boston College fan I have to go with November because I do like to see victories.


Toss Up - Game you'd rather attend next year - at Florida State or the home game against Notre Dame?

Brian: Jeff, are you asking for travel advice? I'd much rather attend the game in Tallahassee. I'm not getting any younger, and in my pursuit of trying to attend a game in every ACC venue, I have yet to cross Doak Campbell off my list. Plus who knows what type of team you'll get with Notre Dame. Florida State players will be coming off their suspensions for the first three games of the season, and this game is crucial to determining the ACC Atlantic winner. See you in Tallahassee October 4. 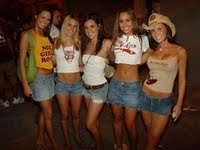 Jeff: The timing of ACC games is once again poor for the Eagles. Last year they got a raw deal by having to start the season with 3 straight conference games. This year they have to play their 3 toughest games back to back to back. Once again a tough break. The home schedule this year compared to last year is phenominal. Notre Dame at home. Clemson and Virginia Tech are two marquee conference home games as opposed to just Florida State last year. Since we started school at BC in 2000, the fans have never stormed the field at a football game despite a lot of wins. This year I think Clemson and Virginia Tech will both come to the Heights ranked high enough that a win would warrant jumping down onto the astroturf and I am already saying don't be surprised if that does happen.

Brian: But the Eagles again get a week off in between Florida State and Virginia Tech, which will give them an extra week to prepare for the Hokies and the Tigers. Not to mention, Jeff, YOU DIDN'T ANSWER THE QUESTION. The answer is this year's schedule. We get the best ACC opponents at home and probably one of the easiest ACC away schedules in recent memory. Plus you want football to matter in November, and 3 trips to the Carolinas and 4 ACC games will make or break the Eagles run at another Atlantic division crown. And, of course, like you mentioned, having a healthy mix of ACC and out of conference games in August and September will give the new offense time to adjust before taking on the ACC heavyweights in October.


Toss Up - What has a better chance? BC winning at UNC tomorrow night (in men's hoops) or winning at Cameron Indoor next Saturday?

Jeff: Winning at UNC is much more realistic. I went to the game at Cameron Indoor last year and man is that a tough place for the visiting team. I would not be shocked if Boston College never wins at Cameron while Coach K is there. UNC is just another large cold out arena. Cameron is special.

Brian: We have a lot more history and bad blood between BC and Duke over the years since we joined the ACC. Think the ACC title game 2 years ago, a 78-76 loss with no love lost between the two sides. Also a game played in Conte was decided by 2 points as well earlier that season. While we have beaten UNC in Chapel Hill in the last few seasons, and even though I don't think we can pull off either win, I think its more likely this year to knock off Duke.


Last one, Toss Up - More surprising, that The Yankees and Red Soxbacked off of the Johan Santana sweepstakes or that Steve Logandeclined an offer from Nick Saban and Alabama to stay at Boston College?

Brian: Neither is too surprising in my opinion. If I had to pick, I'd go with Logan, although the deal with the Tide probably wasn't as close as the article made it out to be. The Twins seemed to have gotten a lot less for Santana than they would have from the Yanks or Sox, but I think they slow played the Yanks/Sox and neither budged, and then ultimately unloaded him to the NL before spring training started.

Jeff: Way to be indifferent Brian. The Red Sox and Yankees backing off is not surprising because they both backed off and Johan is now going to the National League. So no big deal for either team. If he had gone to the Yankees, that would be devastating for Red Sox nation and therefore the Sox would've stayed in the hunt until the end. Meanwhile I am pleasantly surprised that Logan stayed at BC. The ACC is not the SEC and BC is not Alabama.

Brian: Alabama went 7-6 last year, lost to Louisiana-Monroe last year, and are coached by the anti-Christ. Not sure why that job is more appealing than the Boston College gig. If Logan wants to move, he'll go back to being a HC. Plus, like I said, I don't think this deal was as close as we think.