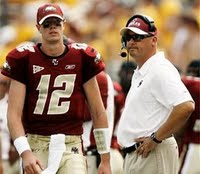 Jeff: Brian, you are head football coach Jeff Jagodzinsky. National signing day is only a few days away. Have you been able to build on last season's success in developing a great 2008 recruiting class?

Brian is Coach Jags: Jeff, let me first say that I don't want you to pay attention to any recruiting ratings (but do pay attention when other big name programs are recruiting the same guys I am). At BC, we are looking for "BC guys," guys with character and the intelligence to succeed at the Heights. I'm looking for guys like the seniors who are leaving in the spring. We don't recruit your average 5-star athlete. That being said though, I think we'll turn some heads with our recruiting class next year. We already have verbals from Haden (RB, Fort Washington, MD), Junior Okpara (CB, transfer from Arkansas), Mike Goodman (OT, Miami, FL), and Larmond (WR, Morristown, NJ), to name a few. And I'm sure we'll make a splash with a few more big name recruits in the coming days. Stay tuned. 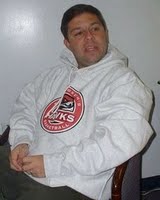 Brian: Jeff, you are Joe Lunardi, ESPN's Bracketology expert. Notwithstanding the fact that I think its ridiculous that bracketology has become a year round profession (brackets in October??), last week the men's team was out and this week we are a 10 seed in an intriguing matchup against Notre Dame. So which is it? Where is this BC team headed?

Jeff is Joe Lunardi: Boston College will make the NCAA tournament this year. As the ACC is starting to shape up we can now expect Boston College to certainly finish ahead of many teams in the ACC and perhaps as high as 4th. The 3 wins they have in conference are probably not against teams that will make the dance but quality wins nonetheless. The ACC will have as many as eight teams in the dance and BC will be one of them. 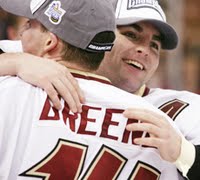 Jeff: Brian, you are senior hockey forward and assistant captain Matt Greene. Having gone to BC High and being a senior now, you have seen the Eagles beat Boston University many times in the regular season yet very few times in the Beanpot (0-3 during your time on the Heights). You're 2-0-1 against the Terriers this year but face them again in the first round of the Beanpot. Is it gonna be any different this year?

Brian is Matt Greene: First off, Jeff, let me say that I am honored that you know who I am, following collegiate hockey in South Carolina is no easy task. And thank you for not mistaking me for the Edmonton Oiler's Matt Greene. But back to the question, the Beanpot is always a tough task. BU's dominance of the tournament lately has been as a result of the arrival of BU's head coach Jack Parker. Ever since he arrived, he gets the Terriers stoked out of their minds for this game. But this isn't the strongest of BU squads. I think we will get past BU, but remember, then we have to beat Northeastern / Harvard. We blew Harvard out of the water, but lost to Northeastern at home in OT back in November. As a reader, if you ask me to be an oddsmaker, I would say we have a 75% chance of taking back the Beanpot.

Jeff: Thanks Matt, good stuff. We might have to invite "you" back more often for BC hockey insight.

Brian: Jeff, you are BC's QB Matt Ryan. Everyone's got an opinion on where you're going to be drafted. John Tomase of the Boston Herald rumored that the Dolphins might be interested in you as the #1 overall draft pick. Others have you going to Atlanta Falcons (Falcons rumored to have just hired Jax's DC Mike Smith). Forget the rumor mill and the rumors, state your case as to where you want to go.

Jeff is Matt Ryan: Brian, I thought you were one of my supporters? Why ask me this question and put me in a tough spot? You know I am not going to come out here and say that I am going to be the #1 pick. Or that I don't want to go to the worst franchise in the NFL, the Falcons. We'll find out on draft day. I'm a team player and I'll play anywhere.

Brian: Ok, ok. I apologize Iceman. I do love ya and just don't want to see you pull a Brady Quinn and get passed over by ... who? Ted Ginn Jr. So I figured you could clear the air and state who you want to play for so you don't look like a total dope like Quinn did last year waiting for 21 teams to pass him over.

Jeff: Brady Quinn played for Notre Dame. He got what he deserved.