Headlines: OT Loss to the Hokies and 3 Points in Maine

Share All sharing options for: Headlines: OT Loss to the Hokies and 3 Points in Maine

Brian: Jeff, our young Eagles hoops team stormed back to force OT against the Hokies Saturday, only to get outplayed in the extra session and drop their second straight ACC contest. Please tell me there is light at the end of the tunnel. What, if anything, can we take from this loss? Was there anything encouraging from this weekend's ACC hoops action? And will we find ourselves free-falling towards the bottom of the ACC league table after this Sunday's game in Clemson?

Jeff: Ted Serandis said it well early in the second half Saturday when he said "the Eagles are down 10 but it feels like 25." Boston College did not deserve to beat Virginia Tech Saturday. Va Tech got nearly every loose ball and 50-50 rebound. BC was playing at home and should've had very high energy so not getting loose balls is inexcusable. Once again we go back to the fact that they are young. A veteran team would've taken care of business Saturday, instead, the Eagles put another check in the loss column. Meanwhile, Clemson lost to Miami which further encourages me that the Eagles might be able to go into LittleJohn and pull off a win this coming Saturday. The Eagles need to find a way to go 2-2 over their next four or they will very quickly slip to a position where they are in too big of a hole to make a run at an NCAA tournament bid.

Brian: To me, this team feels like an NIT team. We are thin coming off the bench, terrible on the boards and played with no heart on Saturday from what I read. I do think that the ACC is still up for grabs though. I haven't completely lost hope yet, but I might just have a walk down the street to MSG in late March in store for me. 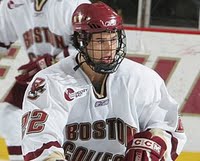 Jeff: Meanwhile, in hockey this weekend the Eagles came home with 3 points from their trip to Maine. Despite dropping 1 points back in the Hockey East standings, you are encouraged, right Brian?

Brian: From what I have read, we absolutely gave away the Friday night game. Matt Greene had a breakaway at 8:33 of the third that would have put us up two scores, but Maine's netminder pushed it aside. Then Gerbe committed a silly roughing penalty at 9:02 to put the Black Bears up 2 men on the power play which allowed them to score the game-tying goal. Of course, we outshot Maine 35-20 in typical BC fashion. Saturday's win was more encouraging, but we did lose Brennan to a mild concussion. We'll see if he plays Friday against Providence.

In other Hockey East action, and unfortunately for the Eagles, the UNH Wildcats swept the BU Terriers over the weekend, pushing their Hockey East lead to 1 point with a game in hand. Luckily for BC, the Friars swept Northeastern, giving the Eagles some separation in the Hockey East standings between UNH, BC and everyone else. There is still a lot of hockey to play, but I don't really see us winning the Hockey East regular season. When the regular season is over, I predict we'll look back at only getting 4 points out of a possible 6 against a down Maine team as the difference in the standings. We will definitely have to take both games left with New Hampshire and play well against a resurgent Providence team. But that doesn't mean I don't think we'll make another run in the Hockey East tournament. My early prediction is UNH takes the Regular season crown, and BC wins the Hockey East tournament, just like last year.

Jeff: BC winning the Hockey East tournament! I like it! Then BC gets a #1 NCAA tournament seed?

Brian: Yes, BC will get an automatic bid for winning the Hockey East tournament. Although I don't know if that makes them a lock for the #1 seed. Winning the HE tournament would most likely make us the #1 seed in the Northeast regional, which is being played in Worcester, Mass (March 29-30) this year. But like I said, there is still plenty of hockey to be played. And we can start off the home stretch by 'minding the gap' and eliminating the Terriers in the BU Invitational (aka Beanpot) first round next Monday.