It's time for a little BC role play, people. 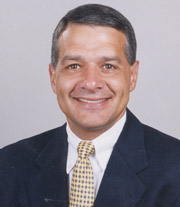 Jeff, you are Gene DeFilippo. How disappointed were you to see a small turnout for the ACC Championship Game?

Disappointed? Of course. Surprised? Not really. Had we had a larger fan presence in Jacksonville, say 7,000+, we would be headed to the Chick-Fil-A Bowl for sure to play Auburn which is something that our Alumni and fans would be very excited about. Instead, we are headed to the Champs Sports Bowl to play Michigan State in Orlando which is still a very good bowl but is not drawing the same attention that a matchup against an SEC team would have. Next time we make the ACCCG it will hopefully be in a city easier for BC students and Alumni to get to so that we can have a better crowd and hopefully come out victourious. Our team had a wonderful season and it is unfortunate that our fans did not show the expected support in ticket purchases at the end.

Brian: Gene, what are you doing guaranteeing victory in the bowl game, buddy? Do you really need to give the Michigan State Spartans more bulletin board fodder to get up for this game?

Jeff: Well, that was taken a little out of context, Michigan State has a good coach and a good program but I like our chances against them. Brian, you are BC hockey coach Jerry York. What's going on so far this season?

It's still early in the season and we are close to the top of the Hockey East standings. You can't say that about some of our closest rivals the past few years - Maine and BU, who we beat down in a home and home earlier this year. We are breaking in our stud freshman goalie, John Muse. And did I mention I'm 311-169-42 at BC and won a National championship. Been to the Frozen Four more times than I can count. The sky is not falling, my man.

Jeff: Whoa, sorry Jerry, BC hockey is as good as ever. Good to hear. I look forward to watching Beanpot highlights on SportsCenter because thats all I get to see of your team down in South Carolina.

Brian: We'll try to schedule a home and home series against the University of Alabama-Huntsville so you can see your Eagles play down in South Carolina. Besides, even if we are dominating Hockey East, you know we always break your heart while you watch SportsCenter highlights of the Beanpot. And this year, we get BU first round, so, yeah ...


Jeff, you are freshman forward Corey Raji. You are averaging 10.5 ppg but less than 20 min pg, whats up with that? 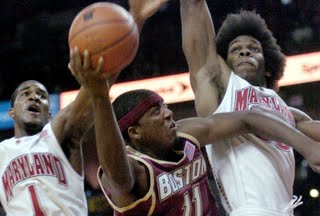 Well, Brian, first thank you for having me on your blog. Second let me just say that Boston College is a great place to be a student-athlete and Al Skinner is a great coach to play for. So far we are 7-1 and 1-0 in conference and I am just happy I can be a part of a winning team here. I came to Boston College to win a national championship and hopefully I can work my way into the starting lineup and in the next four years we can accomplish that goal.

Brian: That's it?! That's all you got? The company line? Skinner's been feeding you some "humble pie." Get angry, fella. 10.5 points per game, 4.3 rebounds per game. You should be in there.


Jeff: I'll be in there soon. For now, I just want to win ball games.


Brian, you are Sam the Minuteman, the mascot of the University of Massachusetts. A play-in UMass squad knocks off #1 BC in men's soccer, UMass goes 1-0-1 against BC men's hockey, and played a top 25 BC team close in football. Tonight you get the BC men's bball team. State your case that BC v. UMass has become a good in-state rivalry. 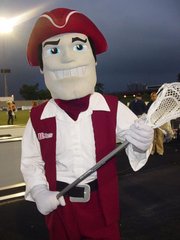 Rivalry would imply that the games have been competitive. The truth of the matter is we have been BEATING DOWN on the Eagles for a while now. A play-in team beats the #1 seed in the NCAAs. Can't happen, right? Wrong. Not in men's soccer. We went into Chestnut Hill, beat the Eagles in their own house, and are now in the Final Four of Men's soccer. That's right. We even had to play an extra game and play that other pretender school in Boston. Also, have you seen the Hockey East standings lately? Didn't think so. UMA #9 in the nation and #2 in Hockey East. We'll beat you down on the hardwood tonight, too. The Governor's Cup is ours, baby. Did I mention that I was runner up in the 2005 Capital One Mascot Of The Year competition? I didn't see your boy Baldwin or that inflatable punchbag Baldwin Jr. anywhere.

Jeff: Come back to Earth Sam, you beat us in SOCCER. When was the last time you saw those highlights on SportsCenter? Hockey does matter, but you beat us once this year, so what? Talk to me in a few years if you can start pulling off wins on a regular basis. You know basketball is what would really make this rivalry but unfortunately in that sport it has been one-sided. UMASS dominated for a little while, now BC does. No rivalry yet, buddy.

Brian: First team All-American mascot, baby. You'll come grovelling back to me with your Eagle feathers between your legs after the bball game tonight.


Jeff, you are Minnesota Timberwolves forward Craig Smith. 16 points, 8 boards 36 minutes in a surprising win over Phoenix. A career best 36 points in a loss to the Wizards. How you feeling big boy? 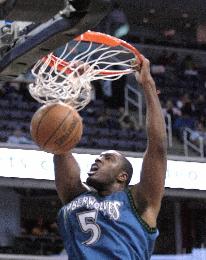 Feeling good, Brian. Feeling Good. You know I am averaging almost 12 points and 5 rebounds on the season. 16 and 8 was kinda just another night for me. I'm working hard though so I'll be getting more and more minutes as the season goes on. This is the way I'm used to doing it. Just the same as how I wasn't highly recruited out of high school but ended up as a first round draft pick. You'll be hearing more and more about me.

Brian: Craig, just one question for you - why are all the current BC NBAers on terrible teams? I feel bad for you guys. Your boy Dudley on Charlotte, Sean Williams on New Jersey and you on the T'Wolves. Ouch. You need to pull a KG and work a trade to get back to Boston.