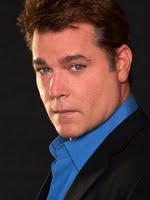 A weak BC-related Happy Birthday wish to Ray Liotta (December 18). Ray Liotta played the real-life mobster Henry Hill in the movie Goodfellas, who was linked to the 1978-1979 Boston College basketball point-shaving scandal. The first two games of the scandal? December 6, 1978 against Providence (BC favored by 7 and won by 13) and December 16, 1978 against Harvard (BC favored by 12 and won by 3). 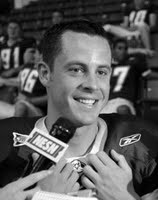 Happy Anniversary Paul Peterson. On this day 3 years ago, you were cleared to play for the 2004 Continental Tire Bowl. Peterson had broken his hand November 20 and had not played in the 43-17 loss to Syracuse that would have secured BC's first ever BCS birth. The replacement QB for that game against Syracuse? Freshman Matt Ryan. 24-for-51, 200 yards, 3 interceptions. BC's senior QB would come back to lead the Eagles to a 37-24 bowl win over North Carolina, only to be carted away with a broken leg in that game.


Jeff: Also a happy Happy Trails to Jacksonville as the host of the ACC Championship game. Earlier this week, I correctly predicted a 0% chance of the game returning to JAX next year. 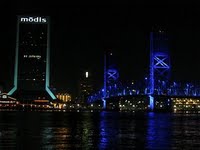 Brian: Due to scheduling conflicts with the city of Charlotte, Charlotte will not host the ACCCG until 2010. In my opinion, this is unfortunate for the ACC as I do not see Tampa producing a better draw than Jacksonville. That is unless Florida State and Miami right the ship quickly.

Jeff: At least in Tampa you have a bigger airport, more hotels and more residents within a 50-mile radius.